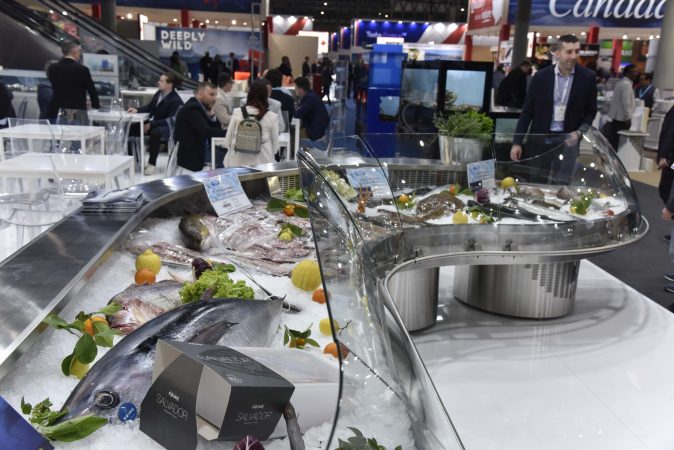 BARCELONA, Spain —  The 28th edition of the Seafood Expo Global/Seafood Processing Global, the world’s largest seafood trade event, exceeded all expectations when it wrapped up in late April at Barcelona’s Fira de Barcelona Gran Vía. A total of 1,550 exhibiting companies from 76 different countries and 26,630 seafood buyers and suppliers from around the world brought an estimated €100 million ($105 million) economic impact to the city.

Event organizer Diversified Communications reported that although the Russia-Ukraine conflict and quarantine in China meant that fewer exhibiting staff attended, the number of buyers at the trade event’s Barcelona debut surpassed 2019 figures. “In a year challenged by geopolitical issues and COVID-19 restrictions, being able to host an event 98% the size of the largest edition ever held is a testimony that the industry was ready to get back together in person,” Liz Plizga, Vice President, Diversified Communications Group, said. The show had been repeatedly delayed by COVID, with its original dates of Sept. 7-9, 2021, moved to April 26-28, 2022, and was canceled in April 2020, when it had been scheduled to take place in its former location, Brussels.

RELATED: Gearing Up for a Reunion to Behold, Trade Show Executive Opens Call for Entries for Gold 100 Awards

The two trade shows are part of Diversified Communications’ global seafood portfolio, which also includes Seafood Expo Asia, which will be held Sept, 14-16 in Singapore, and the online SeafoodSource.com, the official media for Seafood Expo events. It’s a powerful combination for Diversified, which produces trade shows and events in 15 industries, including accounting and finance, building and construction, and technology, among others.