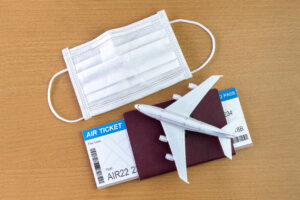 WASHINGON, D.C. — Many trade shows rely on being able to roll out the welcome mat for international contingents, but COVID-19 travel restrictions have done the opposite, leading to mass cancellations and retracted revenue.

That’s why trade show organizers rejoiced at the news today that the Biden administration will relax international COVID-19 travel restrictions, which hopefully will begin to reverse some of the damage done.

The White House issued a statement saying starting in November, the U.S. no longer will bar most non-Americans who have traveled to China, India, the United Kingdom, most of Europe, Brazil and other countries in the last 14 days from entering the U.S. Instead, those wanting to fly to the U.S. will have to just show proof of having been fully vaccinated and a negative test taken in the previous three days.

“News that travel restrictions will be lifted in November is a huge win for the entire trade show ecosystem. From hoteliers, convention centers and all the companies that support the creation of a trade show, all will be positively impacted. Trade shows are incubators of innovation for American business and it’s time to open the flood gates,” Rick Simon, President and CEO of United Service Companies and Chairman of TSE, said.

NAB and the Damage Done

The news comes too late to mitigate the latest blow to the industry, which came when the National Association of Broadcasters canceled its annual NAB Show, scheduled for Oct. 9–13 in Las Vegas. This is a big loss for the city. The last time NAB was in town, in 2019, there were approximately 90,000 attendees and an estimated direct visitor spending of $91.8 million.

According to Chris Brown, NAB’s Executive Vice President and Managing Director, Global Connections and Events, travel restrictions were a significant factor to its cancellation.

“One of the great strengths of NAB Show is that it is a global event, with nearly 30% of our overall registration usually coming from outside the U.S.  Unfortunately, in the current circumstances that is a major factor working against us. It impacted every aspect of the show, from attendance to exhibitors to speakers to vendors and partners.”

Adding to this peril is that the NAB Show’s largest exhibitor is based in Australia, a country that is essentially locked down. “Many of our most important brands are multinational and rely on a workforce that is scattered around the globe. The challenge of trying to get their people into the U.S. ended up being a virtually insurmountable barrier. Some were trying to determine how they could fly people into Canada and Mexico a couple of weeks in advance to try and get them across the border from there. The costs associated with this, not to mention the hassle, all added up. Beyond this there were the pure international exhibitors, many of whom held on as long as they possibly could, but with no practical way to get to the U.S. they had no choice but to drop from the show,” Brown explained.

Does Brown feel the U.S. travel restrictions prior to today’s announcement have inhibited the trade show industry’s ability to bounce back?

“Objectively the answer would have to be, yes,” he said. “At the same time, I realize that we are dealing with an unprecedented situation and our government and others have to do what is right to help contain the virus. Every organization in the events industry understands that we have to prioritize health and safety. We don’t want to do anything that would perpetuate a perception that events are unsafe. We know they can be managed with the right mitigation strategy, but this virus has surprised us a few times already; and we don’t want to be part of creating a new surge because we have opened everything up prematurely.”

The NAB Show was one of many to be impacted by travel restrictions. The NAMM Show, the world’s largest annual musical instrument and equipment trade event postponed its 2022 winter edition at the Anaheim Convention Center from Jan. 20-23 to June 3-5.

“Travel restriction was one of the reasons that many exhibitors began cancelling their space with us in late July/early August. Corporate travel restrictions too, which I believe are part and parcel to the government-led restrictions,” Cindy Sample, Director, NAMM Trade Show Operations, said. “We are led by our exhibitors’ ability to participate in the show and the audiences’ ability to attend. With this morning’s news of ease in travel restrictions, we are optimistic that by June there will be a new level of confidence and clarity in international travel and ease in ability for our members to come to the U.S.”

Industry Reacts to the News

Optimism abounds in reaction to the proposed lifting of travel restrictions. “This is certainly welcome news for the U.S. exhibition industry. More important, it’s good news for the U.S. economy,” Charlie McCurdy, CEO of Informa Markets, said. “Many actions are being taken to restore disrupted supply chains across America and the world.  Now one more, U.S. trade shows, allowing all suppliers, domestic and international, to offer resources to U.S. companies — small, medium, and large — as they seek equilibrium and growth.”

Bob Priest-Heck, Freeman CEO, weighed in on the news “Business events and the spending represented by them are a significant driver of our economy, so the news today is yet another — and much needed — win for our customers, our industry and the economy as well as our fundamental need as individuals to gather together in person. The facts support it. Our research shows in-person business event participants are more likely to be vaccinated than the U.S. population, reflecting a vaccination rate above 80% and creating vaccination coverage that drastically cuts transmission of COVID-19 at events regardless of the gathering size.”

Priest-Heck continued, “Modeling from our partner, Epistemix, has found risks of infection at events to be as much as eight times less than the metro area where they were being held. And vaccines are the answer to getting back to the work we love as a Freeman team, to once again seeing our international colleagues at conferences and events, and to the unparalleled power of live in-person events to drive networking, commerce and innovation.”

Hervé Sedky, board chair of the Exhibitions & Conferences Alliance (ECA) and President and CEO of Emerald, issued the following statement in response to the Biden administration’s announcement.

“The members of the Exhibitions & Conferences Alliance applaud today’s announcement by the Biden administration and appreciate the administration’s support of the economy as small businesses across the U.S. rely on our industry to recover. International exhibitors and attendees are critical to the success of the thousands of conferences and trade shows held in the United States each year. Allowing those who are vaccinated back into the U.S. is an important step in the recovery of our industry and will help us get our stakeholders safely back to business and back to work nationwide,” Sedky said.

For many, this news is what they have been waiting for. “TSE’s breaking news about the U.S. travel policy and the Biden administration’s announcement of a new travel plan starting in November is certainly a long-awaited update and will help to revive U.S. trade shows. During this period with travel restrictions to the U.S. in place, it has impacted the decisions of show organizers  to move forward as planned, postpone to a later date or cancel their trades shows and events altogether,” Rochelle Richardson, CEM, Senior Vice President, Exhibition and Event Services, AVIXA, said. “For many trade shows, the impact of international travel restrictions has significantly affected attendance and exhibitor participation levels. This announcement is great news and very timely for the exhibitions and events industry.”

Cherif Moujabber, Owner, Creative Expo and Conferences, Inc and International Trade and Development Consultant, finds the news of the lifting of travel restrictions hopeful, but points out the bumpy recovery path China is on.

“China is very worrisome on the exhibitor side. Airline traffic is less than 10 percent of what is was a few months ago,” Moujabber points out.