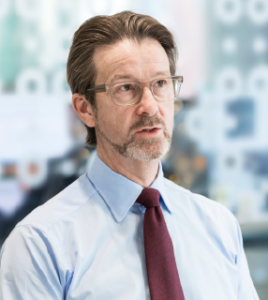 Carter, who was scheduled to be the opening keynote speaker for the 2020 SISO CEO Summit that was canceled because of the COVID-19 shutdown, discussed how Informa Markets has grown to become one of the largest exhibition organizers in the world since he took the helm at Informa in 2013.
Related. TSE Power Lunch with Stephen Carter March 2020
Emslie talked with Carter about his strategy behind the acquisitions of Hanley Wood, Penton and UBM. Carter also discussed where Informa goes next, and his views on the industry’s challenges related to the COVID-19 crisis.

On acquiring Penton
“My memory tells me that Penton, I think, was the underbidder for the Virgo business. One of the things somebody told me many years ago, when you buy a business — if you’re successful — is to find out who else was interested in buying it, because it tells you something about what your competitors are interested in and what they are thinking.”

On the primary driver behind the UBM deal
“Well, I tell you what it wasn’t. We never had any ambition to be No. 1. We saw value in scale. So, by some definition, scale matters — but it wasn’t a driving ambition to be the top of the heap by some measure of size. We were definitely attracted to the business that had been in built in Asia, not just in China but in Southeast Asia. I remember saying to my board at the time, ‘It’s certainly half the value of the deal, if not more.’”

On the integration of UBM
“We tried to get a balance right between two things — which sounds contradictory — one of which was a high degree of respect for the business that was UBM, which we acquired, but the other was absolute clarity that we were the acquirer. Getting that balance right was quite difficult. It wasn’t a merger.”

On support from investors
“I think there is a clear sense from the lending market and the equity market that there is long-term power in what we describe as the form or the format of the product. But nobody believes the product is going to be the same on the other side as it was before COVID-19.”

On running events in near term
“The first question for the industry is how do we build permission and confidence? Permission to run and confidence to attend. That is priority No. 1 for the next six to eight months. How do we define a safe and secure controlled gathering? We would like our product to be near phase one or phase two (as governments reopen).”

To view this SISO interview, https://www.siso.org/siso-town-hall. The next SISO Town Hall meeting webinar is at 11 a.m. EDT on June 3.