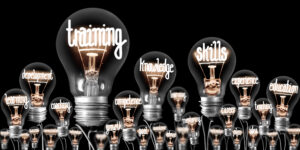 CHICAGO — Alexander Graham Bell’s famous quote — “The only difference between success and failure is the ability to take action” — wasn’t directed toward diversity, equity and inclusion (DEI) challenges, but it was at the core of the message two trade show executives provided during a recent International Association of Exhibitions and Events (IAEE) webinar, “Diversity, Equity and Inclusion in the C-Suite.”

Shari Liss, Executive Director, SEMI Foundation, who is responsible for leading the foundation’s DEI initiatives as well as its workforce development program, talked about the DEI Roadmap and Toolkit her organization has developed to help both SEMI and its 2,400 global member companies on their DEI journeys. It includes a comprehensive list of DEI-related assessments, resources and research. “In order to oversee workforce programs, we have to build a diverse pipeline of talent,” Liss said.

“The roadmap makes the case as to why we all need to embrace DEI, describes the process and what to expect as we move into this work as organizations and companies, and provides a framework to accomplish greater DEI, as well as how to evaluate and track that progress,” she said. The Roadmap and Toolkit, which just launched, already has had thousands of downloads. It is free and available to all, not just SEMI and its member companies.

Dave Labuskes, CTS, CAE, RCDD, CEO of the audiovisual and integrated experience association AVIXA, also is a catalyst for change through action on the DEI front. Several years ago AVIXA established a Women’s Council of Volunteers, and in 2018 it formed a Diversity Council — both are grassroots volunteer efforts. After George Floyd’s murder in 2020, his team began investigating how it can more effectively serve the needs of DEI within the AV industry, most of which consists of small businesses that may have DEI initiatives, but not necessarily the resources needed to carry them out effectively.

AVIXA also launched a DEI pledge committing to creating a more diverse, equitable and inclusive AV industry, which more than 1,500 individuals and companies have signed to date. It also has published information and glossaries around inclusive language. “We have a lot of legacy language in the AV industry — like master clock and slave clock, and male/female connectors — that could be hurtful,” he said. AVIXA also has launched a series of webinars to help people understand how DEI can positively affect their business and create added value.

Making the Business Case for DEI
Panel Moderator Gabrielle Weiss, Vice President and Editor-in-Chief, Trade Show Executive, kicked off the discussion by asking the panelists where they began their DEI journeys — and how they made the business case for the importance of tackling DEI in their respective industries to both their constituents and their board members and other key stakeholders.

Liss said, “The best way to sell it to the C-Suite is through data and statistics, because they make a strong business case on why this is so critical.” Her organization began by gathering as much data on workforce development and retention rate strategies as possible, including a recent McKinsey & Company report on how inclusion matters for businesses, which Weiss noted found that the companies with the most diverse leadership were 33% more profitable than their less-diverse counterparts. “There’s a huge body of knowledge demonstrating that diverse teams and companies with leadership from diverse background outperform other companies and have higher rates of creativity, productivity, problem-solving, innovation, and new revenue generation,” Liss added. “By not plugging into this work, you’re actually leaving money on the table.”

DEI Starts in the Home Office
Labuskes said AVIXA started by curated information from experts and industry resources who have experience with these issues on a personal level, including AVIXA’s Diversity Council members. “I don’t think the expectation is that we get it absolutely right” from the beginning, he said. “I think there’s an expectation that we work on it, we try, we listen, we learn, and we iterate.”

It’s also a function of organizational structure and culture, he said. AVIXA’s 12 volunteer board of directors are men and women representing the AV supply chain from virtually every continent — and that diversity is intentional. AVIXA’s HR team also is focused on creating a more diverse, equitable and inclusive environment, including by bringing in consultants to help address unconscious biases in the organization’s own workforce. “I’m a fundamental believer that the makeup of our leadership impacts our success as an association…we did not feel we should be out there beating this drum without walking the walk.” Liss said SEMI also is doing a lot of unconscious bias training for its staff.

Liss said, “We have to admit first that we’re all learners in this space” — particularly for leaders who do not represent the demographics affected most negatively by bias and exclusion. “We need to listen to and raise the voices of the people we’re trying to help and support, while recognizing that we come to it from a different lens. My starting point always is to collect ideas from people from different walks of life from my own, to really hear and listen and be a learner.” Among those she first tapped into were the 65 people on SEMI’s Diversity Council. She added that there are many DEI trainings and certification processes available, many for free on sites including LinkedIn, to help learners test their own biases and theories. “That’s a nice place to start.”

While AVIXA did catch some flak from some who said this is a societal and political issue, not an AV industry issue, “Our answer is that enhancing the diversity of our industry results in greater innovation and higher levels of profitability, while also providing social benefits of opening up the workforce to a broader audience,” Labuskes said.

DEI and Trade Shows
Events are a very public, fairly easy-to-measure way to ease into a DEI initiative, the panelists agreed. AVIXA organizes a lot of events, including InfoComm 2021, scheduled to be held in October 2021 in Orlando. While there was a perception that the speaker roster tended to be 45-year-old white guys, it wasn’t something AVIXA had really looked at. “We had to start asking questions we had never asked before and then compile that information,” Labuskes said. They also began a “pass-the-mic” program for all of AVIXA’s in-person and virtual events, where they asked “AV celebrities” to reach out to someone in a less-represented community to come on stage with them. “It’s a way to integrate new voices without losing the strength of those existing voices,” he said.

“Diversity on the stage is pretty easy to identify,” as is that number of companies and people who signed AVIXA’s diversity pledge. “Where it gets a bit more challenging is to measure what changes resulted, what the impact of that was.”

Liss said that, while it’s common to have, say, a women-in-the-semiconductor-industry add-on panel during lunch or breakfast, it’s usually not embedded into the program. We also need to get away from performative moves like having a moderator be a person of color and the expert panel not being diverse, she added. “That’s not real.”

At the latest SEMICON West, one of the organization’s largest trade shows that is held annually in San Francisco — though it was virtual in 2020 — DEI was mentioned in almost every main stage talk, even when it wasn’t the focus of the talk. “That’s when we started to realize that it’s gaining traction,” she said.

And that’s the goal: to have DEI so integrated into both workforce and every conversation at an event that it’s not an extra — it’s embedded directly in everything an organization does.

The webinar, available on demand, is free to IAEE members and $49 for nonmembers, on the IAEE website.