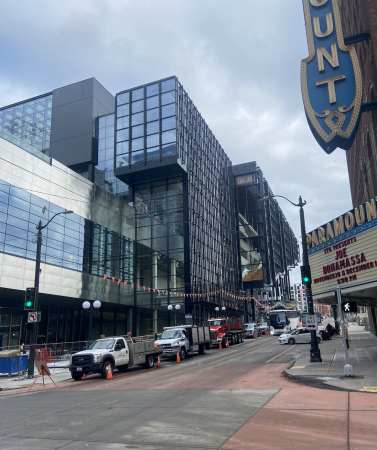 SEATTLE — The Seattle Convention Center will double in size next month with the opening of the Summit building, which brings its total to 573,770 square feet of event space. The Summit building will provide 20% more pre-function space than the existing Arch building to allow for more opportunities to network and gather outside of the exhibition hall.

“This opening has been long-awaited by many, but especially by our local corporate customers,” Visit Seattle National Account Director Anita Cerana, CMP said. “We will have additional availability and organizations will be able to scale up their programs with this meetings campus. With the abundance of natural light in the building and the targeted LEED Platinum certification, it’s being received as a refreshing option for reimagined programs coming out of the pandemic.”

Visit Seattle invited Trade Show Executive to a tour of the Summit building site prior to its grand opening in January, as well as a look at other projects going on in the city.

“The complexity of this project is mind blowing. It has been an incredible feat to build this in the heart of our downtown,” Visit Seattle SVP and Chief Sales Officer Kelly Saling said. “Temporarily relocating streets, redesigning the pedestrian flow of that area, connecting neighborhoods – it’s incredible, really. And all of that pays off when we get to have two buildings in the heart of downtown with easy walking access to our awesome hotel package and incredible amenities.”

The Summit building, like the Arch building’s renovations, has been constructed with sustainability in mind and has already achieved LEED Gold certification as it works its way toward the targeted Platinum certification. The new building features a 58,000-square-foot ballroom with 3,900 recycled planks from log rafts suspended from the ceiling and different lighting options. The floor-to-ceiling windows offer natural light during the day and decrease the need for interior lighting.

Much of the wood detailing throughout the building is recycled, including the wooden entrance to the ballroom in which the signs of its previous use and wear are visible, giving it a recognizable connection with Seattle’s history. Radiant heat flooring was also installed, which utilizes sunlight to warm the building.

Getting visitors beyond four walls of an exhibition hall was also a focus for Summit, and in creating spaces where meaningful connections can happen naturally led to it having 20% more pre-function space than the Arch building.

“The design was focused on meetings and conventions for the future, which included a lot of focus on spaces outside the meeting rooms,” Saling said. “Through the pandemic we’ve emerged knowing that connection is king. Content is critical, and it can be consumed in a variety of ways. But the connections that happen in the spaces outside the meeting room, that’s the advancement, the joy, and the productivity that can’t be replaced.”

“Seattle is fortunate to have a really wide range of accommodation options for planners,” Cerana said. “Generally, Seattle can accommodate around 5,000 rooms on peak night within one mile of the convention center.”

Beyond the convention center campus, the city of Seattle is amid its $756 million Waterfront Seattle project and Seattle Aquarium expansion. Waterfront Seattle is expected to be completed by 2025. Part of that project, Pier 62 opened in 2021 and throughout the year held around 120 events bringing about 100,000 people to the location. The new Habitat Beach will provide direct access to the waterfront, and the Elliot Bay Seawall, created in partnership with scientists at the University of Washington, will provide an improved habitat for salmon as well as a waterfront walkway.

The city’s iconic Space Needle went through a $100 million reinvestment as part of its Century Project, which added 20,000 square feet of glass for more views. The walls and wiring cages of the Needle were replaced with tilting glass walls that lean out allowing visitors to seemingly float over the city, and on the 500-foot level there is a revolving glass floor providing views of Seattle and the Space Needle structure.

“Our city has so much to offer and so much of that is being augmented,” Cerana said. “These new projects will make it easier than ever for attendees to get here and enjoy notable parks, venues and locally owned businesses that make Seattle so special.”