CHICAGO — There was a distinct sense of excitement in the air when the first major trade show since the pandemic, the Inspired Home Show, returned to Chicago’s McCormick Place March 5-7. (Ironically, it was also the first show to cancel two years ago.) Though attendance was down about 60% from 2019, it still drew 20,000 visitors over three days. 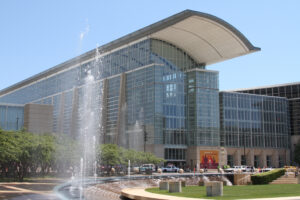 Along with the city ending its mask mandate and proof of vaccination requirement for “certain public spaces” in late February, Chicago’s convention train is back on the tracks. But a full recovery, many observers believe, is still a long way off.

The city has had more than 230 event cancellations because of COVID, costing the city nearly $3.1 billion in economic impact. McCormick Place has 176 events on the calendar this year; it held 289 events in 2019, the Chicago Tribune reported.

To help speed the convention industry’s recovery, Illinois has authorized $15 million in annual incentives for fiscal year 2022 through 2026 to lure events to McCormick Place, according to the Tribune, which also stated that the Metropolitan Pier and Exposition Authority projects combined hotel and convention center revenues recovering to pre-COVID-19 levels by 2023.

Meanwhile, the competitors have been up and running, only adding to the challenge. Heightening the situation was the recent announcement that the Sweets & Snacks Expo, which will celebrate its 25th anniversary in Chicago in 2022 and is expected to generate $21 million for the city, will move to a rotation of Las Vegas and Indianapolis starting in 2024.

Despite this, the new CEO of Choose Chicago, Lynn Osmond, is optimistic. “I’m thrilled about the incentives; it gives us an advantage and puts us on a level playing field with the others that are doing that,” Osmond said. The former President and CEO of the Chicago Architecture Center, Osmond is a true believer in all the city has to offer versus Orlando and Las Vegas. “You need do to an asset map of what we have here: robust cilture, phenomenal restaurants, wonderful neighborhoods, our sports teams,” she said. “We have all that and we need to play to our assets.”