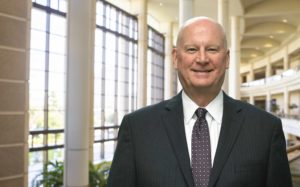 When Tester officially joins the OCCC on Feb. 10, he will be responsible for overall operations, planning, marketing and all activities at the OCCC (www.occc.net). He will also be accountable for ensuring the center’s economic impact of approximately $3 billion annually to Central Florida.

“I believe Mark Tester’s goals of creating high-end customer service and driving economic impact through sales and marketing aligns perfectly with my expectations for what the Orange County Convention Center can be, both now and in the future,” Demings said.

Since beginning his career in the exhibition industry in 1995, Tester has held executive positions at convention centers and CVBs in Austin and Chicago. Since January 2008 he has served as Austin Convention Center Director.

Tester replaces David Ingram, who has held the position of OCCC Acting Executive Director since July 2019.  When Tester begins his OCCC appointment, Ingram will return to his prior role of Acting General Manager.

The OCCC Executive Director position has been filled on an interim basis while  Orange County searched for a permanent replacement for Kathie Canning, who retired in February 2018 after a 32-year career at the convention center. Prior to that, Canning’s predecessor, Jessie Allen, came out of retirement to serve as Interim Executive Director.

“I greatly appreciate the support of Mayor Demings and the Orange County Board of County Commissioners and look forward to working with the strong team at the OCCC,” said Tester. “I have always had great admiration for the phenomenal work of the OCCC and its employees, and look forward to my role in Orlando, the nation’s premier destination for conventions.”

In addition to managing the Austin Convention Center Department, Tester has served on the Executive Committee of Visit Austin and is President of Austin Convention Enterprises, the board that oversees the city-financed, 800-room Hilton Austin. Prior to his time in Austin, Tester spent 13 years in Chicago, holding senior positions at the Chicago Convention and Tourism Bureau (now Choose Chicago) and the Metropolitan Pier and Exposition Authority (MPEA).

“The new space will help conventions create community and foster relationships in exciting new ways,” Tester told TSE. “The convention industry is continually evolving, especially as Millennials and Gen Zers flood the workforce. Convention planners will continually change and evolve to ensure that their events remain relevant and continue to grow. I believe that the OCCC is on the front-end of this evolution and is proactively positioned to be a leader in the industry.”

In recent years, the building has averaged nearly 200 events, including 115 conventions and trade shows that attract more than 1.5 million attendees to the region each year, according to OCCC.