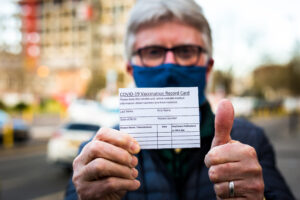 Trade shows are on the comeback trail this fall, with more in-person events being announced seemingly daily. However, they may look and feel a bit different from the good old days of 2019, from socially distanced aisles to staffed buffets to heightened mandatory health and safety requirements to attend.

Yes, we’re talking about the controversial proof-of-vaccination mandate for attendance. While some, such as InfoComm, coming to Orlando in October, give attendees the choice of either providing proof of vaccination or a negative COVID-19 test, others are requiring that all who want to come in person provide proof that they are fully vaccinated against the virus. One example is IMEX America, which is requiring that all attendees provide proof that they have received a full dose of a WHO-approved COVID-19 vaccination. IMEX will be using the well-known and commonly used CLEAR Health Pass app for all North American attendees.

While some destinations, including San Francisco, also are starting to require proof of vaccination for entry at indoor venues, others, such as Nevada, are waiving indoor mask mandates for events that require proof of vaccination for entry. IMEX America’s organizers say they will make a final decision on mask-wearing closer to the show, which is scheduled for Nov. 9-11 at Las Vegas’ Mandalay Bay.

Related. California and a Handful of Cities Lead the Way in Requiring Proof of Vaccination

IMEX Group CEO Carina Bauer said of the decision, “It’s imperative for any organizer to create the safest possible environment for their event. For IMEX America, due to our scale and international nature, we felt that the most effective way to do this would be to mandate vaccinations for entry. We have had an overwhelmingly positive reaction from the industry to this announcement and are looking forward to welcoming back the industry to IMEX America in November.”

The behemoth technology show, CES, scheduled to take place in Las Vegas in January 2022, also has announced it will require all in-person attendees to provide proof of vaccination, though it is also considering accepting proof of a positive antibody test as an alternative requirement.

“Based on today’s science, we understand vaccines offer us the best hope for stopping the spread of COVID-19,” Gary Shapiro, president and CEO, CTA, said when making the announcement. “We all play a part in ending the pandemic through encouraging vaccinations and implementing the right safety protocols. We are taking on our responsibility by requiring proof of vaccination to attend CES 2022 in Las Vegas.”

While proof-of-vaccination requirements are undoubtedly growing among upcoming trade shows, how will the attending public take to these new requirements? New data shows that the idea may be more acceptable than you think, at least among certain constituencies. According to data from Gallup, More than half of Americans favor requiring proof of COVID-19 vaccination to attend an event with a large audience — 58% said they were in favor of vaccine mandates for large events, up from 55% in April. But not everyone is on board with this type of health and safety mandate.

For example, those who already are fully vaccinated have the highest approval rating for large-event vaccine mandates, at 76%, while only 22% of those who are not vaccinated said the same. Not surprisingly in today’s highly politicized environment, political affiliation also matters when it comes to vaccine mandates. Among Republicans, the idea is only approved by 25%, while 48% of independent voters and a full 90% of Democrats are in favor.

Related. Networking, Exhibits Will Drive Attendees Back to Shows

Vaccine mandates for other event-related activities, such as air travel, hotel stays, and restaurant dining, also got a thumbs-up from most of the Americans included in the Gallup research, though those too vary by vaccination status and political leaning. As of August, when Gallup collected the data, 61% approved of proof-of-vaccine requirements to travel by airplane, and 53% for staying in a hotel and eating at a restaurant. These are all slight increases in approval ratings in April, when the percentages were 57% for air travel, 44% for hotel stays and 40% for restaurant dining. All of these dip, some dramatically, when the results are narrowed to just those who are unvaccinated and those who lean conservative.