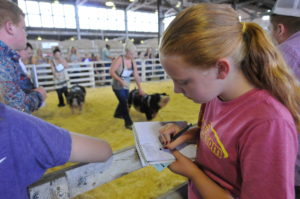 DES MOINES, Iowa – The 2019 World Pork Expo was canceled as a precaution against a potential outbreak of a highly contagious livestock disease.

The National Pork Producers Council (NPPC) said its board of directors decided to cancel the June show in Des Moines out of concern that African swine fever (ASF), which can spread rapidly among herds of hogs, could make landfall in the United States at the show and infect some of the nearly 3,000 hogs that will be on display at the Iowa State Fairgrounds.

“The health of the U.S. swine herd is paramount; the livelihoods of our producers depend on it,” NPPC President David Herring said in a written statement. “Prevention is our only defense against ASF and the NPPC will continue to do all it can to prevent its spread to the United States.”

There is no vaccine against ASF and an outbreak in the United States could have a serious impact on pork exports, the association said. “While an evaluation by veterinarians and other third-party experts concluded a negligible risk associated with holding the event, we have decided to exercise extreme caution,” said Herring.

Recent guidance from the U.S. Department of Agriculture called ASF “a highly contagious foreign animal disease that affects both domestic and feral (wild) pigs. It does not affect human health and cannot be transmitted from pigs to humans.”

Doug Fricke, Director, Trade Show Marketing for the NPPC, told Trade Show Executive that his show does not feature live animals on the show floor. However, the expo is co-located with the World Pork Expo Junior National, which last year featured nearly 1,200 youth exhibitors and a show-record 2,800 blue-ribbon contending hogs. The World Pork Expo was expecting about 500 exhibitors offering various products and services, including imported goods that could be a potential carrier of ASF.

Scientists have concluded that grain-based animal feed and feed ingredients produced in ASF regions of the world, including China, could easily become contaminated by airborne viruses in rural areas and carry the disease to animals in the U.S. The result is that while the World Pork Expo will be cancelled, the show will go on at the Junior National, which is organized by the National Swine Registry. The Registry said in a statement, “Staff members are working diligently to confirm event logistics and details for the live hog show that will continue to be held on June 2-8, 2019.”

Fricke and his team were also busy unwinding the arrangements for the World Pork Expo. He told TSE that exhibitors would be given the option of having their registration fees refunded or applied to the 2020 show. “They are very understanding about the situation,” he said. “They understand what the consequences (of a possible outbreak) could be.” The likelihood of a cancellation fee for the space at the fairgrounds was considered minimal. “We are all pretty much partners in this,” Fricke said.

World Pork Expo slated for June 5-7 was projected at more than 360,000 net square feet of indoor and outdoor exhibit space. “That’s a good solid number,” Fricke said. “When you talk about the gross, both indoor and outdoor, it is some significant space.”

Moreover, last year’s 30th anniversary expo set a show record of more than 500 exhibitors from the United States and abroad. About 20,000 visitors attended the show, and the popular Big Grill area of the show served some 10,000 free grilled-pork lunches to the hungry crowds.