Vaccine Passports: Will They Open the Door to Mass Gatherings in the UK? 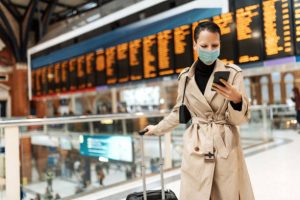 LONDON – On April 5, UK Prime Minister Boris Johnson announced plans for a “COVID-status certification” (vaccine passports) scheme and a “traffic-light system” as part of the country’s roadmap out of lockdown. However, plans are in no way firm, and many of his MPs have expressed concern over the very idea of “vaccine passports.” This plan, however, is intended to facilitate the safe return of mass events to include conferences, trade shows, sporting events and other events without the need for social distancing, and Johnson’s advice to his own citizens provides us with a snapshot as to how and when we might see trade shows return to the UK.

Vaccine passports would allow people who wish to travel or attend events to demonstrate that they have received a coronavirus vaccine, tested negative for the virus or recently had COVID-19, the latter meaning they have some immunity. Once travel resumes, Britain intends to rank countries on a traffic-light system as green, yellow or red based on their level of vaccinations, infections, and new and emerging virus variants. People arriving from “green” countries won’t face quarantine but will have to be tested, Johnson said.

“We’re some way off finalizing any plans for COVID-certification in the UK,” he said.

The issue of vaccine passports has been a hot-button issue worldwide as it raises questions about how much right governments, employers and venues have to know about a person’s virus status. The government has acknowledged that vaccine passports are all but unavoidable, with many countries certain to demand proof of COVID-19 status for entry. Johnson also said barring British businesses from asking customers for similar proof would be “an unjustified intrusion on how businesses choose to make their premises safe.”

Opposed by a large majority of MPs, including many in Johnson’s own Conservative Party, the policy is expected to face stiff opposition when it is put before Parliament later this month. Johnson acknowledged that vaccine passports raised “complicated ethical and practical issues” and that their introduction was by no means certain.

Later this month, a series of events that includes soccer matches, comedy shows and marathons will rely only on testing. Moving forward, vaccinations and acquired immunity are expected to be alternative ways to demonstrate “safe” status.

As to making holiday and other travel plans, Johnson reminded the public during Monday’s press conference that they needed to be “realistic” as cases continue to surge in popular destinations. He said he could not give a firm date for international travel resuming.

“I wish I could give you more on that,” he said, and added that there was not enough solid data on the virus.