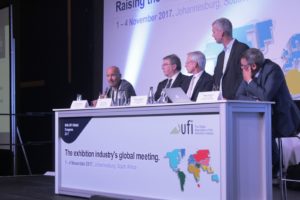 Johannesburg, S.A. — UFI, the Global Association of the Exhibition Industry, presented its annual progress report, announced new initiatives and confirmed events already set for 2018 in remarks at its Annual General Assembly meeting that took place ahead of the Global Congress held Nov. 1-4 in Johannesburg, South Africa. More than 400 delegates from 56 countries attended the Global Congress.

The initiatives, under the banner of “Raising the Odds — Pressures and Profits,” were presented. UFI President Andreas Gruchow noted growth in the number of members participating in events as well as broadening the audience for UFI events. In 2017, more than 1,200 industry professionals attended various worldwide UFI events that ranged from the Global CEO Summit in Barcelona to the Global Congress in Johannesburg.

The Global Congress represented a landmark for UFI, as it was the first time the conference was held in South Africa and the first time on the African continent since 2003. UFI’s European event saw a 13% growth in attendance to 200 delegates after it was rebranded as the “UFI European Conference.” That event will be permanently moved to May beginning in 2018.

At the UFI General Assembly, one session included highlights of a survey that focused on exhibiting companies’ behavior, loyalty to the industry, advocacy for the industry and how well their own needs are met by the exhibition industry. That research was conducted in partnership with event research specialists Explori and written by the Society of Independent Show Organizers (SISO). The study follows a similar study focused on visitors to trade shows a year ago.

For the exhibitor study, 1,040 trade shows from more than 40 countries took part in post-show research. Their information was paired with in-depth interviews with 57 show directors representing 17 countries. More than one-third of global exhibitors said they had low levels of satisfaction with the exhibitions where they take part, but still report a high level of loyalty toward the shows themselves.

The 25% of respondents reporting high levels of satisfaction with exhibitions in which they take part were found to be more likely to experience exhibitor growth compared to those expressing less satisfaction with their participation. The full report is available to members at www.ufi.org/research.