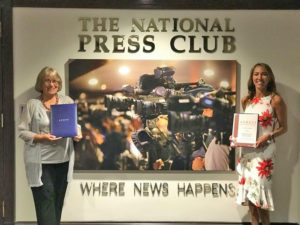 The Azbee awards are one of the trade media’s most competitive award programs. They honor the best in business-to-business media and recognize outstanding work by B2B, trade, association and professional publications.

The awards are given out by the American Society of Business Publication Editors (ASBPE). This year’s ceremony was held at the National Press Club.

“I am proud that the tradition of excellence in journalism continues at TSE,” he said. “Our team has once again demonstrated the excellence we deliver to the exhibitions industry, and I look forward to our continued success.”

This year, more than 1,000 Azbee entries were received. More than 100 experienced B2B editors and designers judged the 78 entry categories.

Weiss expressed gratitude to the ASBPE awards committee and pride in her staff.

“Danica and Sandi’s hard work, professionalism and talent really shined bright this year,” Weiss said. “With two national and five regional awards and Fastest 50 around the corner, I am very excited for us at Trade Show Executive and for all the things to come as we continue to report on our innovative industry.”