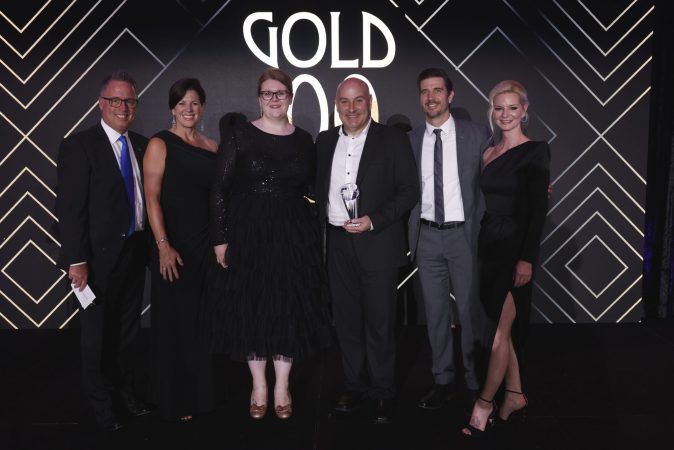 This year’s Gold 100 shattered attendance and revenue records, with more than 200 industry professionals and a sold-out event at The Ritz-Carlton Bacara, Santa Barbara.

“We are incredibly grateful to our sponsors and the entire Trade Show Executive community for being a part of this year’s Gold 100 Awards & Summit,” Vice President and Editor-in-Chief Gabrielle Weiss said. “Our focus was reuniting our industry, bringing prescient content for this time to the TSE stage, exchanging ideas to succeed as the business events industry rebounds and, of course, honoring everyone’s hard work and successes in 2021. It was an incredible honor to recognize these executives whose perseverance and determination has helped to make our return possible.”

And the Winners Are…

The Squeaky Clean Award went to the ISSA Show North America and the DEI Leadership Award was presented to COUTURE. Informa Markets earned The Top Show Organizer of 2021. With the 2020 Gold 100 event being canceled, ICUEE, The International Construction & Utility Equipment Exposition, was awarded The Greatest Trade Show of 2019 at this year’s celebration.

Along with the Grand Award winners being announced, the rankings of the Gold 100 honorees were revealed at the event. The top five trade shows ranked by nsf were The Utility Expo, Green Industry & Equipment Expo, SEMA Show, PACK EXPO Las Vegas and Healthcare Packaging EXPO and the NBAA Business Aviation Convention & Exhibition. The top 10 trade shows by nsf together totaled 6,854,291 nsf.

This year’s Educational Summit, featuring panels and presentations and panels by trade show industry leaders, many of whom lead shows that were Gold 100 honorees and Grand Awards winners, sparked important conversations necessary to moving the trade show industry forward, as did the keynote presentation from the esteemed professor of economics at the University of California Santa Barbara, Dr. Peter Rupert. Thought-provoking topics discussed on this year’s panels included trade show growth strategies, show floor design, sustainability and rebranding. The live Power Lunch interview with Tom Gattuso, Vice President of Events at SEMA, conducted by Weiss, also focused on the future along with how Gattuso has been able to grow the SEMA Show, which ranked third by nsf on the Gold 100 list.

Networking was a main component of this year’s TSE Gold 100, including a United Service Companies-sponsored golf tournament at Sandpiper Golf Club and a polo grounds experience at the Santa Barbara Polo & Racquet Club sponsored by GES/onPeak, which were both at capacity. The opening day of networking came to a close with the LVCVA-sponsored opening reception, where the anticipation for the awards was tangible.

The Fastest 50 Awards & Summit will take place at the Miami Beach Convention Center May 1-3, 2023, to celebrate the fastest-growing shows of 2022. Entries for the Fastest 50 can be submitted at https://tradeshowexecutive.com/fastest50entry/, and the deadline for submissions is Dec. 30, 2022.

The 2023 Gold 100 Awards & Summit will be held at the Fairmont Del Mar in San Diego Sept. 13-15. Entries can be submitted at https://tradeshowexecutive.com/gold100entry/ to be considered for the next edition of the Gold 100.