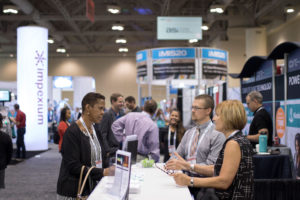 Toronto — Business associations based in the U.S. have been working to expand their presence overseas in recent years, and the fruits of their efforts will be one of the topics of a trio of upcoming surveys announced during the Center for Association Leadership’s (ASAE) Annual Meeting & Exposition.

The annual meeting was held Aug. 12-15 in Toronto, and attendance totaled 4,563, including 2,476 association executives and representatives of 395 exhibiting companies.

Association leaders can expect to be contacted by ASAE in the coming months for data points and insights on how their organization is positioned in international markets. The surveys will also cover current policies and procedures that associations have in place, as well as the closely watched poll on compensation for senior association staff.

The surveys were among the announcements and updates provided by ASAE President & CEO John Graham IV during the meeting. Graham told reporters at the opening news conference that ASAE would continue expanding its resources for member associations and would also be a front-line advocate on issues affecting associations, such as tax reform, airline travel issues and legislation in various states that could be considered discriminatory to certain groups.

ASAE said 76% of this year’s attendees had never visited Toronto, and it appeared they were unanimously happy they made the trip this year. Considering that 75% of the ASAE attendees had decision-making authority when choosing meeting venues, that was good news for the folks at Tourism Toronto.

Canada’s largest city was in top form this summer as it welcomed ASAE. The mid-summer weather and scenic waterfront location encouraged attendees to enjoy exploring and sampling the vibrant nightlife after a full day of meetings and sessions.

A full schedule of networking events brought attendees to some of the hottest spots in Toronto:

The annual 5K Fun Run/Walk got participants out of the hotel on a cool Sunday morning to enjoy the scenery and connect with other early arrivals.
The Opening Celebration brought the crowd to the Royal Ontario Museum, deemed one of the world’s most beautiful museums by Conde Nast Traveler. Afterwards, revelers were encouraged to take a walking tour of the trendy Bloor-Yorkville neighborhood.
The ASAE Foundation’s The Classic was a ticketed reception that included live music, plenty of food and a classic waterfront view of the Toronto skyline in twilight
ASAE bid farewell to Toronto at the Closing Reception held at Roundhouse Park, which is adjacent to the Metro Toronto Convention Centre. The bash was sponsored by Choose Chicago, the hosts of next year’s ASAE Annual Meeting & Exposition
Notables on Stage

The ASAE Annual Meeting & Exposition each year serves as the official debut of the organization’s newest notable members, including 94 individuals who this year earned their Certified Association Executive credential.

The 2018 ASAE Board of Directors was announced. The three members include:

Sheri Jacobs, President and CEO of Avenue M Group, LLC, received the Academy of Leaders Award while Elena Gerstmann, Deputy, Executive Operation at the American Society of Mechanical Engineers, was presented with the Professional Performance Award.