CHICAGO — Trade Show Executive is the winner of not one but two Tabbie Awards, a competition created by the Trade Association and Business Publications International (TABPI) which recognizes excellence in business, association and trade publications from around the world.

“To win these notable honors amongst top-notch trade publications from around the world is humbling. I am proud of the TSE team and very grateful to our Executive Editor, Andrea Doyle and the late Senior Editor, Regina McGee,” TSE Vice President and Editor-in-Chief Gabrielle Weiss said. “To take home the coveted Silver in the inaugural COVID-19 coverage category for our story on diversity is so encouraging and timely as we launch TSE’s Inclusion and Diversity Task force.”

The Silver award was for the story, “The Time is Now,” featuring Ron Walden, Reed Exhibitions USA’s first Global Executive Sponsor for Race. Walden was featured in the November 2020 Power Lunch section of the magazine with an accompanying podcast. 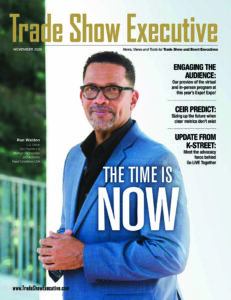 “It was such an honor to work with Ron Walden and share his story with the readers of Trade Show Executive. ‘If not us, then who? If not now, then when?,’ a question civil rights icon Rep. John Lewis asked his entire life is the mantra that guides Ron. It was especially poignant when I interviewed Ron and wrote the story — at the height of the COVID-19 pandemic and in the throes of unrest prompted by George Floyd’s death,” Doyle said. Read the full article here.

The feature article recognized as a Top 25 in the world “Pivoting to Non-Show Revenue Streams,” was written by Senior News Editor Regina McGee. The focus of this article was on the ways leaders in the trade show industry successfully brought in different revenue streams as the events and exhibitions industry came to a COVID-19 standstill. Read the full article here.

The 2021 Tabbie Awards featured nominations from across the globe, with submissions coming from the U.S., Canada, the U.K., Australia and New Zealand. This year’s competition grew markedly, with more submissions than any year since 2017.

To our greatest sorrow, Regina McGee passed away on June 3 after a long and courageous battle with cancer. Donations can be made to the Virginia Thurston Healing Garden Cancer Support Center in Harvard, Mass.