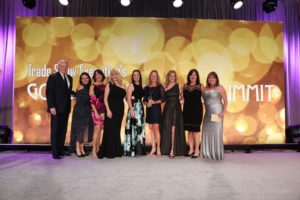 The two mega-shows were among a blue-ribbon roster of recipients of the Grand Awards saluting the largest and most accomplished trade shows of 2017. The honorees were announced at a glittering banquet attended by top show organizers and managers, and their industry partners at the seaside Monarch Beach Resort in Dana Point.

CONEXPO-CON/AGG took home three coveted crystal trophies for being the overall largest trade show of the year; for the Best Use of Data Analysis; and The Marketing Genius Award. CES was honored for Best International Presence and tied for the Best Launching Pad with Cosmoprof North America. CES Asia was recognized as the Best Gold 100 Show Extension Overseas.

Informa, Global Exhibitions was recognized as the organizer with the highest number of shows on the newly released Gold 100 with seven, and Reed Exhibitions’ PGA Merchandise Show took home the title of The Greatest Trade Show of 2017.

“Presenting the Grand Awards at the Gold 100 is an annual high point in the exhibition calendar, and this year was no exception,” said TSE Publisher and Editor Gabrielle Weiss. “The organizers behind all of these great events were part of a stellar crowd that we and our sponsors and partners were proud to be a part of.”

This year’s Grand Awards included a new twist on the rankings for exhibit space, the determining metric for shows that make the Gold 100 rankings. Awards went not only to the largest show, CONEXPO-CON/AGG, but also to the largest events in two other tiers based on exhibit space:

The full list of remaining Grand Award winners include:

Look for complete coverage of the TSE Gold 100 Awards & Summit in our next issue. Also, start making plans to attend the TSE Fastest 50 Awards & Summit, which will take place in Atlantic City in June; the Fastest 50 recognizes the fastest-growing trade shows of 2018.

“The Gold 100 is always a great way to enter the home stretch of the calendar year,” said TSE Vice President of Events Diane Bjorklund. “Like everyone in the industry, we are already looking forward to 2019 and another great year for the shows that make up the Gold 100 and Fastest 50.”