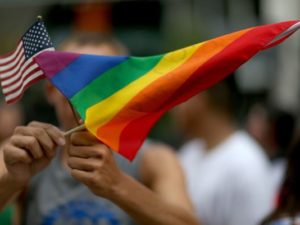 Chicago — The American Association of Law Libraries (AALL) last week at its annual meeting in Austin, Texas, that there would be no future AALL meetings in the state due to recently passed legislation in the Texas House of Representatives that would deny some services to LGBTQ individuals.

The new rules would bar transgender individuals from using the restroom that corresponds to their gender identity in public schools and publicly owned buildings in Texas. The proposal is called the “bathroom bill” because of its similarities to North Carolina legislation that became law last year.

The state senate legislative actions — SB3 and SB91 — were approved by the Texas Senate committee last week and will be voted on by the full state senate this week. They are expected to pass.

AALL, which was meeting in Austin for the third time in 12 years, said the legislation (HB3859) that was passed by the Texas House of Representatives in June was finalized too close to this year’s Austin event to cancel without “significant financial repercussions,” according to then-President Ronald Wheeler Jr. The Chicago-based association is set to meet in Baltimore in 2018.

At the conclusion of last week’s meeting, AALL also sent a letter to the mayors and CVB directors of Austin, Dallas, Houston and San Antonio announcing a boycott of Texas for all future events until the legislators reverse the pending anti-transgender “bathroom bills”.

Current AALL president Greg Lambert — a Texan — said, “It pains me to see my state take actions that are unnecessarily discriminatory as well as harmful to the state’s economy.” He added that the legislative efforts discriminate against LGBTQ families and “run counter to AALL’s core values and are unwelcoming to many of our members.”

Some proponents of the Texas legislation said its provisions were about “safety and women’s privacy,” while opponents worry that enacting the legislation would create a backlash like that seen against North Carolina in 2016. An independent analysis of that backlash estimated that North Carolina would lose more than $3.76 billion in business over the next decade, including major sports events, corporate relocations, entertainment events and numerous meetings and conventions.

“This effort to marginalize and exclude LGBTQ people has been tried in other states with disastrous results for local economies and those who work in those economies,” Lambert added.

In Texas, Dallas-based companies American Airlines, Southwest Airlines and Dell, along with AT&T, IBM and the Episcopal Church also opposed the current legislative efforts on this issue. And the NFL said it would reconsider hosting future Super Bowls in the state if the legislation was enacted. The NCAA, which relocated its scheduled North Carolina events last year, is scheduled to host the Final Four in San Antonio in 2018.