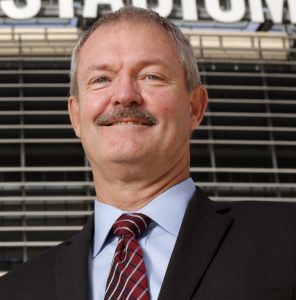 “Brad has worked across the sectors in various leadership roles, including within IAVM, which have earned him awards and praise,” said IAVM Chair Karen Totaro. “We are excited to have him take over the helm of IAVM.”

Mayne is no stranger to IAVM. He has been the Dean of the IAVM Venue Management School at Oglebay since 2012. He received the association’s Charles A. McElravy Award in 2009 for his contributions to the venue management industry. Two years later, he was honored with the Legacy Award by the IAVM Foundation.

Joining IAVM will bring Mayne back to the Dallas area, where from 1998 to 2012, he was President and CEO of Center Operating Company, and the American Airlines Center, home of the NBA’s Dallas Mavericks.

Mayne left Center Operating in 2012 to take over at Met Life Stadium, home of the New York Giants and Jets.

“I am thrilled to take on this new professional challenge for an organization that is critical in advancing the work and professional practice of venue management and is so highly valued among industry professionals,” Mayne said.