Riverside, CA – The Riverside Convention Center in Southern California reopened in March after a $43.6 million expansion that increased the center’s available space to 66,816 sf indoors, including 28,000 sf of prime exhibit space.

The renovation, nearly two years in the making, also includes a 20,000 sf outdoor plaza for events, 22 breakout rooms, and two ballrooms. Meeting rooms are equipped to accommodate the hearing-impaired, the exhibit space is fully carpeted and high-efficiency LED lighting is used throughout the center. Theater-quality audio/visual technology and energy-efficient occupant sensors add sustainable features to the mix.

The new center also offers a broad range of on-site services, including lighting and rigging services, convention planning and registration assistance, name badges (if the group is booked through the CVB), teleconferencing, state-of-the-art audio/visual equipment and packages, Wi-Fi and catering services. In addition, improvements were made in the direct connection to the Riverside Marriott.

The facility can accommodate events for up to 3,000 people. It is within walking distance of 650 hotel rooms at the Hyatt Place, Riverside Marriott and Mission Inn Hotel & Spa. Those factors are typically a draw for a range of statewide events, corporate events or regional trade shows reflected by some of the first users of the expanded center.

The first convention to use the expanded space was Mary Kay Cosmetics, which brought 2,000 people to town beginning March 19. The National History Day California State Competition will return to the convention center April 25-27, bringing approximately 1,000 students to the city. It was last held in Riverside in 2012 before renovations began.

In all, 90 groups already have booked events at the convention center for dates extending to 2018, according to Debbie Megna, executive director of the Riverside Convention & Visitors Bureau.

The convention center is managed by Raincross Hospitality, which also manages the convention & visitors bureau, the nearby Riverside Municipal Auditorium, the Fox Performing Arts Center and some area hotels. 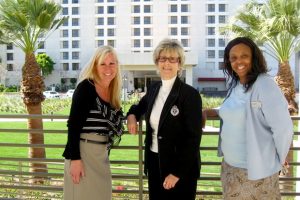