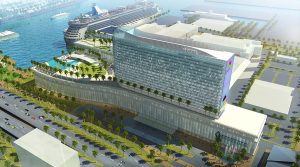 A new adjacent 800-room hotel, including a ballroom and 83,000 sf of meeting space, is also part of the plan as are an outdoor plaza and rooftop function areas that will take advantage of coastal Florida’s balmy weather.

“The new facilities, especially an on-site hotel, puts us in a lead position with the meetings industry,” said Stacy Ritter, President and CEO, Greater Fort Lauderdale Convention & Visitors Bureau. “Our success in hosting events and conventions annually will be amplified with new infrastructure and resources that meet the needs of the meeting, event and association planner and attendee of the future and bring over $100 million of new annual economic activity to our community.”

The proposal, which must still be turned into a formal development agreement between Broward County and the development team, puts the construction timeline at groundbreaking next year and completion pegged for 2021. The cost was previously projected at around $550 million.

Along with potentially drawing more and larger trade shows and other events to the center, the expansion is seen by Fort Lauderdale as a boost to the nearby Greater Fort Lauderdale Convention Center District development.

The details of the plan submitted by the Texas developer, Matthews Holdings Southwest, include the 68,000 sf of new exhibit space on the ground floor; a 14,000-sf ballroom and 20 new breakout rooms. The plans also meet LEED Gold certification criteria.

The new plan is a revision of the preliminary plan that Matthews Southwest released a year ago, according to the Sun-Sentinel newspaper.