PARIS/LONDON — UFI and Explori recently released new findings from the ongoing “Global Recovery Project” report. The findings were conducted by live events research specialists Explori, in partnership with UFI, the Global Association of the Exhibition Industry, and supported by SISO, the Society for Independent Show Organizers.

Over 9,000 respondents from 30 countries concluded that while attendees and exhibitors overwhelmingly prefer live events, virtual events (also known as digital or hybrid events) play a critical role in serving many specific groups of future participants. About half of those interviewed have now experienced an online-only event in some format, with two-thirds of exhibitors having been a speaker at a third-party event or run their own online event, with only 13% of exhibitors having paid to sponsor a third-party online event.

Sophie Holt, Global Strategy Director, Explori added: “Online and hybrid seem to have a complementary role to play alongside live events. Not only will they give reassurance to visitors who are concerned about safety in the short term, but still want to connect with their community, but they may also have an important role to play in bringing new audiences to established events.” 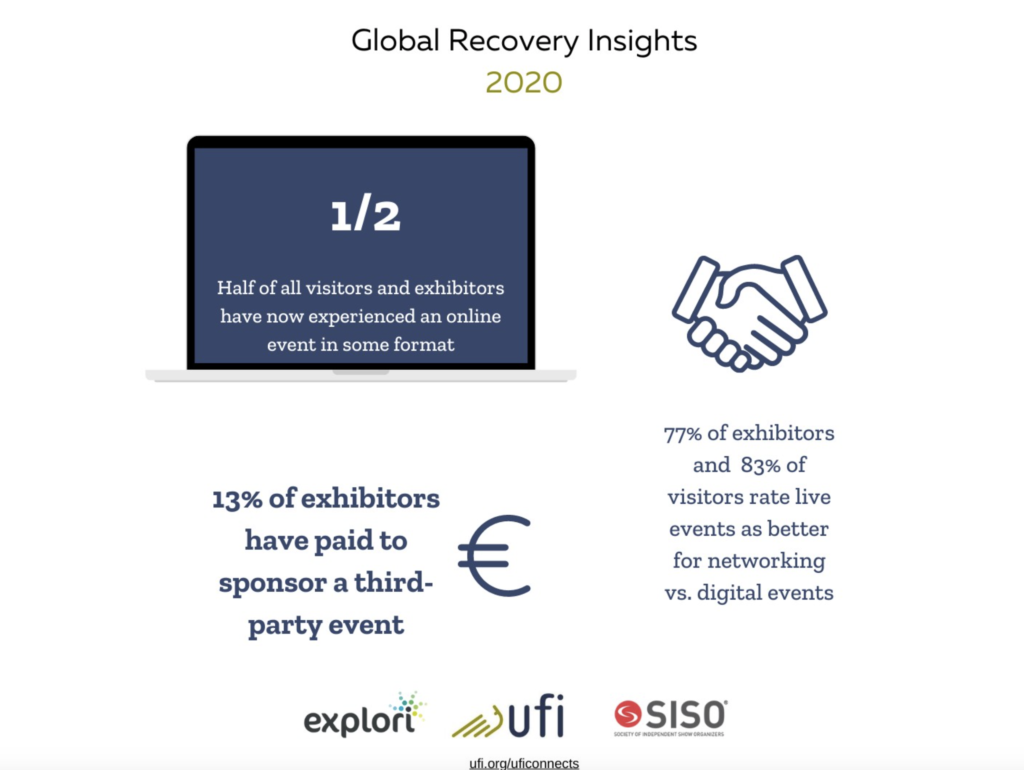 The report concluded that both attendees and exhibitors rate live events more highly across most areas, with networking considered a specific strength of live events. 77% of exhibitors and 83% of visitors stated that face-to-face events were much better than online in this respect. In fact, 52% of attendees felt online-only events were as good as, if not better than live events with respect to the content offered. 79% have at least some interest in attending a hybrid event as an online-only delegate, and as far as considering an event they had never attended before, they had a much higher interest in attending remotely compared to an event they were already familiar with.

However, visitors also acknowledge that online-only events are less expensive than face-to-face events and have started to demonstrate that they can compete with the quality of the content F2F events offer.

“This global survey delivers key insights to organizers as they plan ahead. It underlines the clear preference that people want to meet in person to do business. At the same time, it gives a clear roadmap for areas where digital events need to evolve to become a permanent fixture in a hybrid future for the business events industry,” said Kai Hattendorf, UFI CEO.

Further study results will be released in the coming weeks via the industry press and the UFI Connects webinar series available here.