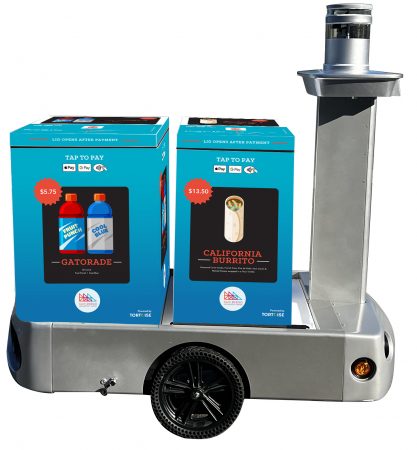 SAN DIEGO – Attendees at this week’s Comic-Con International are being treated to a new twist in food service. Sodexo Live!, the hospitality partner to the San Diego Convention Center, is teaming up with Tortoise to launch the first mobile vending robot in a convention center.

Comic-Con, which is taking place July 21-24, for the first time since 2019, will offer its more than 135,000 attendees a mobile smart store for food on-the-go thanks to the partnership of Sodexo Live!, which specializes in bespoke catering, sales, and event management services, and Tortoise, which focuses on forward-thinking technology. Tortoise’s robot allows for instant access to food and beverage, which can help save show-goers the wait on long lines during lunch hours.

“It means so much to welcome Comic-Con fans back to the convention center for the first time since 2019,” Bobby Ramirez, District Manager, Sodexo Live!, said. “Partnering with Tortoise for the return of this major event allows us to provide guests, many of whom have been coming to Comic-Con for years, a new way to experience our chef-driven food but in a quicker fashion for those who want to keep moving throughout the event. Tortoise is a great new technology and we’re happy to help them launch in the convention center space.”

Tortoise’s separate compartments will be stocked with California burritos created by Sodexo Live! Executive Chef Sufi Karaien, as well as bottles of Gatorade. Additionally, Chef Sufi and the team at the San Diego Convention Center will aim to use locally sourced ingredients, often purchasing from area partners within a 150-mile radius of the convention center.

“We’re always looking to innovate the guest experience in a way that is both helpful and exciting,” Steve Pangburn, CEO, North America, Sodexo Live!, said.

As the low-speed cart roams the show area, attendees can tap to pay with a credit card, Apple Pay or Google Pay, and take their item with a transaction time of fewer than 15 seconds.

“Entering into the convention center space is exciting, and we look forward to delighting attendees with our seamless new future-facing solution,” Dmitry Shevelenko, Co-Founder and President, Tortoise, said. “With Sodexo Live!’s track record in providing hospitality for some of the best and biggest convention centers in the country, we knew we could form a strong relationship to ultimately provide a fun new experience for guests.”

Sodexo Live!’s culinary team is also responsible for creating the popular limited-edition chocolate bars that are produced each year at Comic-Con. There are about 1,000 of each of the four bars sold per day.