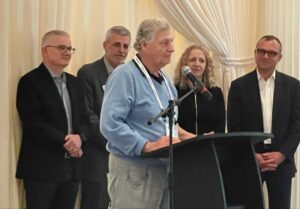 The Robert L. Krakoff Industry Award of Excellence is named in honor of a legend of the industry, Robert L. Krakoff, who built and ran some of the most successful businesses in the exhibition industry. It is the only award that SISO presents, and it is only given to the most impactful leaders of for-profit businesses in the exhibition and event industry. It is awarded annually to an individual who has made outstanding contributions to the face-to-face industry during their career.

“This award means a lot. I actually knew Bob and thought a great deal of him. He was an industry leader,” Shomer said. “When he passed away, I was on the board when we decided to have an award in his honor. What I find ironic is that I remember being at the Vinoy in the early 2000s when John Mooney was given the first Robert L. Krakoff Leadership Award. Here we were back at the Vinoy, and I had no idea I was the recipient. It was such a coincidence and a total surprise.”

Shomer’s experience in the trade show industry is extensive. He was Executive Director of SISO from 2007-2015. Prior to that, Shomer was a member of the SISO board of directors for nine years and spent one term as its chairman. He is one of the owners of Abilities Expo, the nation’s largest producer of exhibitions for the disability community.

Shomer holds a BA from Ohio Wesleyan University and an MBA from The Bernard Baruch Graduate School of Business at CCNY in New York. His career started with IBM in New York, and he later joined Honeywell Information Systems in White Plains. He moved to London in 1967 and spent 10 years as Vice President, International Operations for Computer Investor’s Group, a leading computer-leasing company. His career in the trade show industry began when Sheldon Adelson hired him as VP of Marketing and Sales for the Interface Group, producers of COMDEX, the landmark exhibition that changed the face of the trade show industry.

Shomer is a member of Trade Show Executive’s Diversity, Equity and Inclusion Task Force that guides editorial direction and seeks to illuminate how trade show executives can incorporate diversity into their ranks, while improving revenue and reflecting the changing demographics of its audiences.

His background in diversity started in college when he was a member of the only inter-racial fraternity in the country and includes 20 years as a board member of the NAACP and his 14 years as Chairman of the Abilities shows.