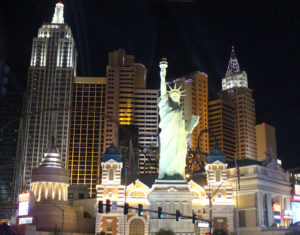 Las Vegas — In the wake of a horrific lone-gunman massacre in Las Vegas Sunday night, the trade show industry stood tall in its efforts to assist those affected by the tragedy and displayed unwavering resolve to continue with events scheduled for this month in Las Vegas.

Las Vegas convention officials were quick to respond to the shooting. Las Vegas Convention and Visitors Authority President and CEO Rossi Ralenkotter issued a statement that offered condolences and prayers to the victims, calling it a “horrific yet isolated incident.” He also said it was important to allow the Las Vegas Metropolitan Police Department to conclude their investigation and attend to the needs of the victims and their families. “Las Vegas is a strong community that will work through this tragic incident,” he said.

Peter MacGillivray, Vice President of Events & Communications for the SEMA Show, ranked No. 5 on the Trade Show Executive Gold 100 Class of 2016, is ready to welcome 160,000 attendees and 2,500 exhibitors to this year’s event starting Oct. 31 at the Las Vegas Convention Center. He said that only a handful of people contacted him with questions about the show.

“Everyone is heartbroken, but the number who might not come (as a result of the shootings) is relatively small,” he said. “We learned after 9/11 that our industry tends to unite during difficult times.”

MacGillivray added that event security is “not set in a mold” and that “we are always looking to be the best we can be.”

Mark Herrera, Director of Education for the International Association of Venue Managers (IAVM), told Trade Show Executive that recent mass casualty incidents “are frequently targeting high-occupancy venues,” and learning how to recognize and deal with those situations should be part of industry training. “We really need to know how to respond to active shooter situations,” he said.

IAVM already incorporates this training into its academy for venue safety and security. “We include active shooter training for this very reason,” he said, noting that employees of theaters, arenas and other public venues increasingly are interested in this training. “Staying on top of this is key,” Herrera said.

Show organizers whose events are set for this month are hoping attendees won’t be deterred from coming to town, and early indications are that events will not see a significant decline in attendance. Some shows scheduled for Las Vegas in the near future also were quick to express their sympathy to those directly affected and affirm that the shows will go on.

The Global Gaming Expo (G2E), sponsored by the American Gaming Association (AGA) and managed by Reed Exhibitions, will meet starting today at the Las Vegas Sands. G2E, which ranked No. 59 on the Trade Show Executive Gold 100 Class of 2016, is expected to draw 26,000 industry professionals to the gaming capital of the U.S.

A statement issued by AGA President and CEO Geoff Freeman said the group is in close contact with local and national law enforcement, as well as the Las Vegas Sands where the event will be held, and had no plans to cancel or postpone. “The gaming industry is a tight-knit community, and Las Vegas is the beating heart of our operations,” Freeman said.

Guest safety also is a high priority. “We have always made the safety of our guests a primary concern,” Sedky added, “and tragic events like the mass shooting in Las Vegas Sunday night remind us that we must always be vigilant when it comes to the security and well-being of our guests.”

“The AGA and Reed Exhibitions will offer our full assistance as the city recovers and we will strive to honor the victims of this tragic event,” he said.

Next week, IMEX America is scheduled for the Sands Expo Center, bringing more than 5,500 global decision-makers to the trade show and hosted buyer program for the meeting, event and incentive travel industry. A written statement from IMEX Chairman Ray Bloom and CEO Carina Bauer reassured attendees that both IMEX and the Sands have “very strong security in place, with both visible and plain clothes security teams in the venue and at the show.” Organizers said they also will review the security plans and “assess any additional security measures that are needed at this time.”

Rick Simon, President/CEO of United Service Companies, the parent company of Trade Show Executive, noted that there is plenty of technology that could mitigate such attacks, but implementation is challenging in some situations. “You can have all the equipment, but (are you willing) to screen every bag at a hotel,” he asked.

No other major events scheduled for this week or next indicated any intent to cancel or reschedule their shows because of the shootings. Among those are gatherings of mortgage brokers, HR technology managers, beer wholesalers, and water managers whose shows are at venues throughout town from the Rio to South Pointe.