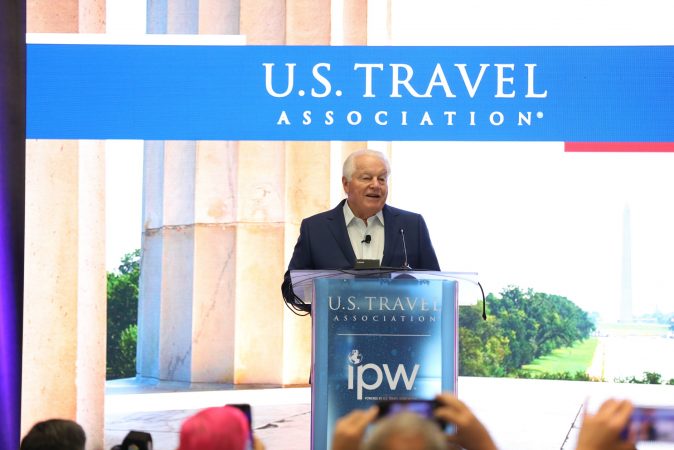 ORLANDO, Fla. – The travel industry came together June 4-8 at the Orange County Convention Center in Orlando, Fla., for the 53rd annual IPW, put on by the U.S. Travel Association. IPW is the global travel industry’s leading international marketplace and the largest generator of travel to the U.S. This year’s trade show drew nearly 4,800 event attendees from more than 60 countries and logged 77,000 scheduled business appointments over three days. The delegation also included nearly 500 members of the international and domestic media.

IPW brings together global travel professionals, including U.S. destinations, hotels, attractions, sports teams, cruise lines, airlines and transportation companies, along with international tour operators, buyers and wholesalers from around the world. About $5.5 billion in future travel to the U.S. is booked due to conversations at IPW, according to Malcolm Smith, Senior Vice President of Business Development and General Manager of IPW.

“When we started budgeting and planning for IPW 2022, there was still Delta and then the Omicron surge, and it was anybody’s guess what the COVID restrictions would look like,” Smith said. “We were really pleased with the excitement we heard, not just domestically from our exhibitors, but from around the world — people ready to get back to international travel.”

According to Smith, many of the event exhibitors at this year’s trade show, including hotels, convention bureaus and other travel suppliers, either increased their footprint on the show floor or increased their event sponsorship.

“We had record advertising and sponsorship revenues this year,” he said. Some new aspects to the trade show this year included education sessions on the show floor as well as an additional eight hours of networking time.

One of the major topics of discussion at this year’s IPW, which was sponsored by Brand USA, the destination marketing organization for the U.S., was the lifting of pre-departure COVID testing for inbound travelers to the U.S.

“Lifting pre-departure testing requirements was a centerpiece of U.S. Travel’s advocacy efforts and a major topic of discussion at IPW 2022,” Smith said in a release after the official lifting of restrictions was announced. “This announcement came after tireless, consistent and coordinated efforts to send a clear message to the administration. Heartfelt thanks to U.S. Travel’s public affairs team for making this accomplishment—one that paves the way for a true resurgence of international travel to the U.S.—possible.”

“This IPW is sending a message that the U.S. is open for business and eager to welcome travelers from around the world,” Roger Dow, CEO of the U.S. Travel Association, said. “We are taking a huge step forward here to bring back international travel, restore jobs, and re-establish the bonds that connect our countries and cultures.”

Though IPW was held in person in Las Vegas in 2021, the numbers were much smaller due to the pandemic. “Last year we had just under 600 international delegates and this year over 1,200, so more than double which is really exciting,” Smith said. “Last year we had a campaign of Reunite, Reconnect and Rebuild, but it was so challenging for so many markets to get to the U.S. We felt this would really be the year of the reunion when the global industry came back together again.”