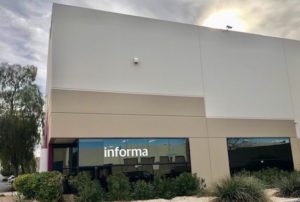 LAS VEGAS — Informa Markets, a division of the public company Informa, officially opened a Las Vegas office set to service the 23 trade shows and events the company will host in the city in 2020.

“As the leading global exhibitions organizer, Informa Markets understands the value the city of Las Vegas provides our customers,” said Ken McAvoy, Executive Vice President of Corporate Development for Informa Markets. “We have been an active member of the community for decades, and with our business continuing to grow, we felt now was the right time to put down roots in the city and expand our presence here.”

The employees officed in Las Vegas represent a mix of existing staff members and new hires. Over the course of the next year, Informa plans to double the number of employees and hire local talent to fill those roles, McAvoy told TSE.

Recently, Informa Markets partnered with the LVCVA on its first city-run event-transportation service, as well as with Mandalay Bay Convention Center on energy efficient lighting systems. Informa is also working closely with the Las Vegas Convention Center, which is expected to become one of the largest convention complexes in North America once renovations to its existing structure and new construction are completed in 2023.

To recognize and honor these efforts, Informa Markets will bestow its first-ever Partnership Award to the LVCVA at a reception on February 5 in Las Vegas.

“We are thrilled to have Informa Markets find a permanent home in Las Vegas,” said LVCVA President Steve Hill. “Informa’s events have helped support the city of Las Vegas for many years, and their continued dedication to driving industry to this city is a big win for us.”