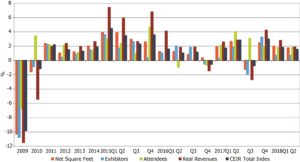 Boosted by a strong economy, a moderate 1.6% increase was posted in the second quarter of 2018, and even more impressive numbers are expected in the second half of the year, according to The Center for Exhibition Industry Research (CEIR).

The index showed all exhibition metrics had positive year-over-year gains in the second quarter. Real revenues and attendees each jumped by 1.9%, NSF rose by 1.8%, and exhibitors increased by 0.7%, according to the index.

“We do not believe at this time that the exhibitions industry underperforming GDP is a troubling sign,” said CEIR CEO Cathy Breden, CMP, CAE.

The overall numbers were dragged down by Financial, Legal and Real Estates, and Education. They posted year-over-year declines.

Several industries have been in a secular decline, and until they stabilize, they will slow the industry’s overall growth, Breden said. Those declining industries are Business Services; Consumer Goods and Retail Trade; Education (ED); and Financial, Legal and Real Estate (FN).

“The secular, long-term downward trend in FN and ED outweighed their positive short-term macroeconomic factors during the second quarter. As a result, FN and ED declined,” Breden said.

More insight into the numbers is available with the CEIR Event Performance Analyzer, a tool that measures how an event is performing in its sector and the  industry as a whole.