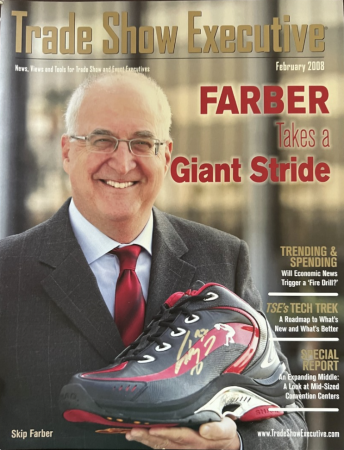 Skip Farber, a beloved trade show industry leader with more than three decades in the industry, passed away on Jan. 4, 2023. He was 70.

Farber joined the WSA in 2004 as CEO and reenergized the WSA Show into a premiere event for the industry. The biannual show, which was held in Las Vegas, drew crowds of around 37,000. In 2006, the WSA sold its assets to WSA Global Holdings, LLC, which was at the time a new, privately held company headed by Farber and Chief Operating Officer Diane Stone. Farber sold the footwear and accessories exhibition to ENK International in 2006. He retired from the WSA in 2009.

In 2009, Farber and his son, Jason, formed Carlin Capital Partners, a private equity investment firm for which he continued working after retiring from the WSA, serving as the Principal at the firm.

Farber was known for his generosity to the show industry and the trade show industry, making a $1 million grant to the Center for Exhibition Industry Research and another $37 million to show industry organizations and charities.

He was active in the trade show industry with organizations including American Business Media, SISO (Society of Independent Show Organizers) and IAEE (International Association of Exhibitions and Events), where he was also a frequent speaker.

Family and friends gathered for Farber’s funeral, which was held Jan. 10 at Hillside Memorial Park in Los Angeles. He is survived by his wife, Karen; his two children, Jason and Jodi; his sister and brother; and four grandchildren.

Darlene Gudea, President Emeritus of Trade Show Executive: “It was my second of 22 years at Cahners/Tradeshow Week in 1979 when Skip Farber became my boss. I became part of a business that would eventually span six continents and enable worldwide friends and mentors. Skip helped accelerate those kinships by connecting me with global leaders and resources.  It was rare and wonderful to have such a family atmosphere in the workplace, and I’m so grateful to him because many of those strong friendships last today.

“If I was limited to only one sentence to describe him, I’d say Skip had one of the sharpest minds in the business, coupled with a big heart. In a business which arguably involved one negotiation after another, he excelled because he listened as long as it took, and both parties felt they received the best end of the deal.

“He had a great leadership style. He immersed the TSW team in tough challenges to see how we would respond and guided us if we got off course. As long as he was around, we knew things would work out. He was our Kevlar vest, shielding us from corporate politics so that we could focus on the tough weekly deadlines. He came to work with an upbeat spirit and hearty laugh that I can still hear today.

“He cared about our life outside the office, and likewise, we fell in love with his parents; his wife, Karen; son, Jason; and daughter, Jodi.

“I wasn’t done asking him for advice! He was taken away too soon and so unexpectedly. My wish is for everyone to have a boss like him at least once in their lives. His memory will forever live on in my heart.”

Irene Sperling, retired Vice President and Associate Publisher at Trade Show Executive: “I met Skip in 1979 when I started working for his family-owned Security World Publishing Company. I had the pleasure of working with his parents and of course met Skip’s wife Karen.

“Shortly after I started, the company was sold to Cahners Publishing. Skip brought me along for the most interesting and exciting ride of my working life! He had a special sense about people and paired me with Darlene Gudea at Tradeshow Week!

“He was never a micromanager; he challenged us daily and gave us lots of leeway. He was down-to-earth, always full of new ideas, thoughtful, gregarious and what a contagious laugh. He was sensitive to others’ needs, acknowledged accomplishments and made the impossible possible. With one of the brightest minds in our business, you knew he was going to be on an upward trajectory! And look what he accomplished in his lifetime! It’s breathtaking! Forever in my mind is that Skip Farber smile.”

Cherif Moujabber, Owner of Creative Expo and Conferences, Inc.: “Skip had a rigorous mind and a big heart. He was always ready to help, and as if that was not enough, he was funny as can be. I got the chance to really spend three years with him, working day in and day out from our Los Angeles office. That’s where I got to know his sense of humor and how he was always ready to help, no matter the occasion. He was dedicated to his staff and very witty. I will miss him deeply.”

Steve Sind, President and CEO of Global Events Strategies LLC: “I am very fortunate to have known Skip for nearly 40 years. As relative newcomers to then Cahners/Reed, we naturally formed a certain bond, but even more — Skip was a really nice guy! He had an infectious laugh and smile, a wicked sense of humor, very smart and had a very quick mind (and always willing to speak it). He became not only a close colleague but a good and loyal friend, which are all winning traits. He loved what he was doing and excelled at it, and while stubborn at times to the corporate bureaucracies, he forged ahead and succeeded.

“One such incident, as I was told and can recall, was the time budgets were being reviewed in L.A., a necessary evil when all the numbers were closely scrutinized and hotly debated. Numbers were cut, even the not-so-important, arguments ensued and for hours the staff who worked so hard to put all the numbers together was under the gauntlet. Not fun! Exhausting! On this day, however, Skip was prepared: He came into the room after everyone was seated. He started the meeting by bringing out the largest container of Vaseline he could find, slammed it on the table and said, ‘I’m ready.’ After that, everything moved along ‘smoothly.’

“When he moved to Reed’s corporate HQ in the Boston area, we very frequently met for lunch at Buff’s Pub around the corner — Eric Lisman and Tom Caridi included. Those were the GOOD days! I will always cherish those times as ‘Buff’s Buddies’ with our buddy and friend, Skip.”

Eric Lisman, President of Media Front Inc.: “Our industry and its people benefitted enormously from Skip’s extensive trade show and media career. Apart from his senior level corporate leadership, he was always happy to provide insightful professional and personal guidance to everyone he met. These personal connections remained strong throughout the years, as we were all touched by his remarkable grace — and his equally remarkable sense of humor. Skip’s passing is an immeasurable loss.”

Do you have fond memories of Skip Farber? Please share your thoughts and memories in the comment section below.