IMEX America Shows How It Is Done 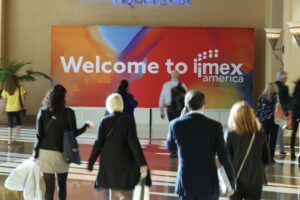 LAS VEGAS – Mandalay Bay Resort & Casino in Las Vegas was the site of a joyful reunion as IMEX America gathered for the largest global meetings industry trade show. After having to cancel last year’s show because of the COVID-19 pandemic, this year’s show was highly anticipated, as evidenced by the hugs on the show floor.

This year was the event’s 10th edition, and it attracted 3,300 buyers and more than 2,200 exhibiting companies representing more than 200 countries.

There was a wide array of international exhibitors, and it helped that the day before the show started, the travel lockdown on international air travelers arriving in the U.S. was lifted. On November 8, international flights began landing at U.S. airports for the first time since the lockdown was implemented.

Not surprisingly, numbers were down from the 2019 show, with 4,000 buyers and 3,400 exhibitors. As has been the trend with the trade show industry, exhibitors reported that those in attendance were there to do business.

“Appointments were around 50,000 and feedback shows they produced strong business for exhibitors. Also notable was the quality of business and RFPs coming from walk-up appointments by attendee buyers,” Ray Bloom, Chairman and CEO, IMEX, said.

The mood on the trade show floor was upbeat.  “It’s been heart-warming and joyful to hear so many comeback stories. London & Partners, the LVCVA, and dozens more, including hotel groups such as Mandarin Oriental, have all reported strong business pipelines right through Q3 next year and into 2025. This IMEX week has given us all reason to believe the industry’s future is bright,” Carina Bauer, IMEX CEO, said.

This year’s IMEX America was Canada’s largest showing ever, with more than 70 partners in attendance, representing the country’s diversity with the largest floor space at the conference. “Our message is Canada is open for business,” Chantal Sturk-Nadeau, Executive Director of Business Events, Destination Canada, said.

“We are back doing what we love,” Michael Massari, Chief Sales Officer, Caesars Entertainment, said. “Our calendar for the next 15 months is super strong.”

Health and safety were a top focus of the gathering. All IMEX America participants had to provide proof of full vaccination against COVID-19 to gain entry to the show. Health Pass by CLEAR was used, and once vaccine certification was shown, each attendee was issued an IMEX wristband allowing access to the show floor.

IMEX America 2022 dates were confirmed as October 11-13, with Smart Monday powered by MPI on October 10.