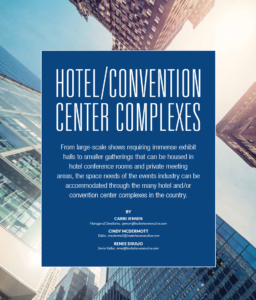 Convention centers can feature a variety of spatial offerings, from abundant halls and meeting spaces to smaller niche events and conferences to more quaint gathering spots for satellite meetings and events. While the accommodations can range from satisfying to luxurious, a key to the success of any event can be the availability of high-quality hotel spaces near those convention centers.

Each year, Trade Show Executive (TSE) publishes our Hotel/Convention Center Complexes Report, a guide to assist show organizers and meeting planners in determining which major hotels, resorts and stand-alone properties are most suitable for exhibitions, meetings, events and conferences. This year’s survey has been expanded to include eight additional properties that have opened in the last 12 months.

New Accommodations on the Way

The construction of new hotel projects for the first half of 2020 in the U.S. is described by one industry association as “robust.” A survey by Lodging Econometrics (LE) reported 5,582 construction projects/687,801 rooms considered to be “in the pipeline” throughout the nation. Despite some project cancelations, postponements and delays, minimal impact on the U.S. construction pipeline amounts to a downturn of only 1% by projects and rooms, Year-Over-Year (YOY). Even though hotel operations have been sharply impacted, the pipeline remains healthy because of interest rates at all-time lows.

In the first half of 2020, the U.S. opened 313 new hotels with 36,992 rooms. Currently, 1,771 projects are under construction, which will bring another 235,467 rooms, increases of 3% and 1% respectively, YOY. According to LE, projects under construction are seeing some delays, but this is not unexpected given the current situation. Additionally, 481 new projects with 56,823 rooms were announced into the pipeline in the first half of 2020.

However, LE reports the second quarter of the year experienced a sharp downturn in deal making. With most franchise development staff working from home, non-essential travel halted and the continuing pandemic, the ability to get new contracts signed has slacked. This resulted in a 53% decrease in new project announcements compared to the second quarter of 2019, when 359 projects/44,895 rooms were recorded.

The LE analysts added that franchise companies with the largest construction pipelines at the end of the second quarter of 2020 are Marriott International with 1,487 projects/195,952 rooms; followed by Hilton Worldwide with 1,395 projects/160,078 rooms; and InterContinental Hotels Group with 920 projects/94,499 rooms. Combined, these three companies account for 68% of the projects in the total pipeline. New York City continues to have the greatest number of projects under construction, followed by, in order, Los Angeles, Atlanta, Dallas and Nashville. Together, these five markets account for nearly a fifth of the total number of rooms currently under construction in the country.

In the last year, Portland, Ore., unveiled its first convention center hotel, The Hyatt Regency Portland at the Oregon Convention Center, which opened in December 2019. Another component to this area is Hotel Eastlund, which opened in July of this year across from the convention center. Other new hotels situated across from their city’s convention centers include: Home2 Suites by Hilton Charlotte Uptown, Charlotte, N.C., debuting in November 2019; Hotel Paso del Norte, Autograph Collection, El Paso, Texas, opening in August 2020; and Residence Inn Providence Downtown, Providence, R.I., launching in October 2019. In Kansas City, Mo., Loews Kansas City Hotel premiered in June 2020, attached to the Kansas City Convention and Entertainment Facilities. Courtyard Sioux City Downtown/Convention Center in Sioux City, Iowa, opened in May 2020, attached to the convention center. Springhill Suites Lakeland, Lakeland, Fla., launched in June 2020, across from the Lakeland RP Funding Center.

Meanwhile, other cities are closing in on completion of impressive new hotel/convention center complexes. Kalahari Resorts and Conventions Round Rock is set to open in November 2020 near Austin, Texas. The property will showcase a state-of-the-art convention center spanning 220,000 sf and including 40,000-sf and 27,000-sf ballrooms, 16 meeting rooms, a full-service business center and 50,000 sf of outdoor event space. Marriott Tacoma Downtown, Tacoma, Wash., attached to the Greater Tacoma Convention Center, is scheduled to open in October 2020. Oklahoma City, Okla., will welcome two new facilities in 2021 — The Oklahoma City Convention Center and the Omni Oklahoma City Hotel, which is attached to the convention center.