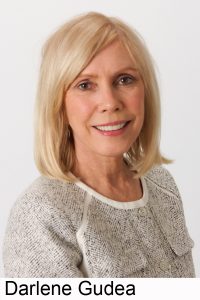 Oceanside, CA  – Darlene Gudea, President, Publisher and Editor of Trade Show Executive Media Group (TSE), announced her intention to retire in July 2017 after nearly 40 years in the exhibitions industry. She plans to remain connected to Trade Show Executive and serve on various boards. 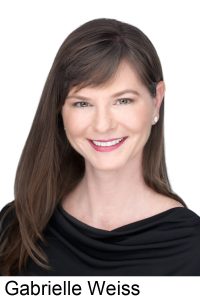 No immediate changes to TSE’s publications, events and staffing were announced. However, as the industry evolves and serves a changing demographic, TSE will continue to innovate across its portfolio of digital, print and live event platforms to serve all constituents.

“If the saying is true, ‘Choose a job you love, and you will never have to work a day in your life,’ then the last 38 years of my life have been one incredible adventure after another,” said Gudea. “As a budding new journalist in the trade show industry in 1978, I was amazed by the access I could get to literally anyone, from event coordinators to CEOs, and from government officials at ribbon cuttings to celebrities at trade shows – and ask them anything.  Most of them didn’t hold back and answered every question I had. They opened their doors and hearts to me, telling me about their business, their successes and setbacks.” Gudea said with this privilege, she was keenly aware of the responsibility that went along with it – the duty to be fair, impartial and ethical.

“To this day, I feel that those at the lower levels of the company ladder are just as interesting as those at the top.  Everyone has an interesting story to tell,” she says.  She is particularly struck by the newcomers in the industry – their enthusiasm, excitement and intense desire to master the necessary skills to move up and lead a major show or company.  One of the fascinating things about her career is that rather than being pigeonholed in reporting on one industry, she learned a little about every industry from apparel to technology.  “As such, my job was exhilarating and never boring,” Gudea said.

Her greatest satisfaction came from creating unique content that helped industry members do their job better or stimulated their thinking to test new business models.  She also found it particularly gratifying to take the top-read features in the magazine – such as Trending and Spending and Power Lunch — and bring them to life on stage with columnists at the Gold 100 or Fastest 50 events. Gudea also takes great pride in her team, many who have worked with her for decades, and who she says are equally responsible for her success.

“This is an exciting turning point for TSE and the industry,” said Gudea, who along with Simon and the TSE team built the magazine into the leading monthly source of strategic information for trade show professionals. Launched in 2000 as a small, bi-monthly magazine, TSE increased its frequency to 12 issues per year, augmented the magazine with four annual directories, created the digital E-Clips Breaking News service and two must-attend industry events: The TSE Gold 100 Awards & Summit and Fastest 50 Awards & Summit. Other events and digital services are in the works.

“Darlene’s retirement next year will cap a remarkable career. She is the undisputed dean of journalism in the trade show industry. Her work with TSE and, prior to that, Tradeshow Week, put her on a first-name basis with virtually every prominent executive in the industry,” said Simon. “It’s been more than a pleasure to work with Darlene and watch her transform the magazine into what it is today. Her professionalism and dedication ensures a lasting legacy at the magazine and in the trade show industry.”

Gudea was presented with the “2016 Legends in the Industry Award” by the International Association of Exhibitions and Events (IAEE) on August 8 at the Waterfront Hilton in Huntington Beach. Gudea is also a past recipient of the Distinguished Service Award from IAEE and the Distinguished Service Award from the Trade Show Exhibitors Association (TSEA).

She has also served on the board of directors of IAEE and TSEA as well as the boards of The IAEE Foundation, the TSEA Foundation, the Center for Exhibition Industry Research (CEIR) Foundation, and the Exhibit Designer & Producers Association Foundation (EDPA).

Gudea joined the industry in 1978 as Managing Editor of Tradeshow Week, published by Reed Business Information. She rose through the ranks to become VP/Publisher & Editor-in-Chief in 1986, a position she held for 14 years and with her team, built it into the “Bible of the Exposition Industry.”

In March 2000, she joined Advanstar Communications as Group Publisher of the CRM Group. In September 2001, she was named Director of the Magazine Division of Hispanic Business, overseeing its editorial, research, circulation, sales and production departments.

Her hands-on leadership has also resulted in 56 journalism awards for TSE and TSW. “I have been privileged to work with a dynamic and loyal team that is well-rounded and skilled in news reporting, feature writing, statistical analysis, social media, event management, design, and advertising and sponsorships,” Gudea said. “We have quite a football team here.  We have also been able to thrive under ownership by Richard Simon and United.” 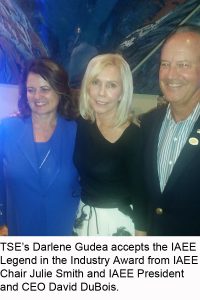 Gabrielle Weiss joined United Service Companies in 2015 and oversees the creation of content and communication strategies for the company. In this role, Weiss has successfully led efforts to brand United’s security group, which has included message development, creating sales and marketing materials, designing relevant and targeted webinars, and a promotional film. She also led the relaunch of the company’s social media platform.

Before United, she worked for prominent public affairs agencies and as a freelance journalist in Chicago, where she was nominated for the prestigious Lisagor Award for her coverage of homeless women on Chicago’s North Side. Weiss studied journalism and public relations at Roosevelt University in Chicago. “This is an exciting opportunity to lend my passion for writing and skill set as a manager to the talented, award-winning staff at Trade Show Executive,” said Weiss. “I am thrilled to be a part of this fast-paced and dynamic industry and to help continue TSE’s longstanding tradition of providing excellence in reporting and analysis.”