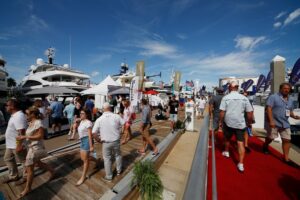 “From accessories to superyachts, an unprecedented amount of business was done,” Doole reports. A billion dollars in business, to be exact, he added.

“Dealers told us they have never done business at this level at a boat show before,” he explained.

There were more serious buyers at the five-day show than in years past.

This year, the 62nd annual FLIBS was back to its full glory, with more than 1,000 boats on display after a scaled-back show took place in 2020 because of the pandemic. The show is owned by the Marine Industries Association of South Florida and produced by Informa Markets. 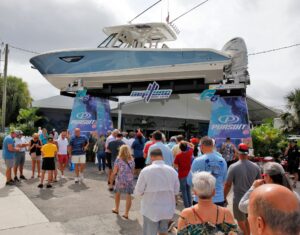 The largest in-water boat show in the world that represents $1.3 billion in annual economic impact impressed on every level, with some of the world’s most head-turning boats, yachts and superyachts on display.

Amazingly, overall attendance broke records this year, drawing over 6% more visitors compared to the previous record set in 2019. Quite an accomplishment considering there were fewer overseas boating executives at the show because of the U.S-imposed international air travel bans that were still in effect.

Health and safety were a focus with all attendees, exhibitors, staff and more required to follow the AllSecure standards. Hand sanitizing stations were at show entrances and restrooms, and deep cleaning was conducted before, during and after each day of the show.

In addition, with more than 80%of the show taking place in open-air outdoor spaces, FLIBS offered a safe environment. 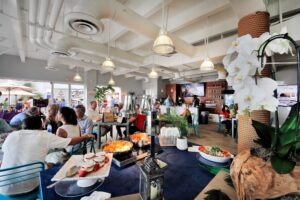 FLIBS spans nearly 90 acres across 3 million square feet of exhibit space connected by an intricate network of water and ground transportation services. The heart of FLIBS was at the Bahia Mar Yachting Center. The adjacent Hall of Fame and Las Olas marinas, Pier 66 Marina and the Greater Fort Lauderdale/Broward County Convention Center were also utilized. The Convention Center was an important component of the show, Doole said, and it featured brands like Nautical Ventures and the Aquazone, Robalo, Grady-White and more.

“Exhibitors and show attendees were extremely pleased to have the indoor portion of the boat show at the convention center back in the mix this year,” Ed Simon, Executive Vice President of Visit Lauderdale, said. “The boat show is the Super Bowl of events for Greater Fort Lauderdale. Take 2019. It brought in over $1.3 billion in regional economic impact and over $700 million in products sold, as well thousands of visitors and attendees from around the world.”

With demand for boating products and accessories at an all-time high, FLIBS offered consumers and exhibitors alike with the opportunity to meet face-to-face and showcase highly sought-after products. According to the National Marine Manufacturers Association, more than 310,000 new powerboats were sold in 2020, sales figures that the recreational boating industry has not seen since before the Great Recession in 2008.

Work on the remainder of the $1.2 billion Greater Fort Lauderdale/Broward County Convention Center expansion continues, including an eastside expansion with waterfront ballrooms, meetings rooms and kitchen facilities, an expansive outdoor waterfront plaza and an 800-room upscale headquarters hotel interconnected with the convention center. Full completion is expected in late 2025.