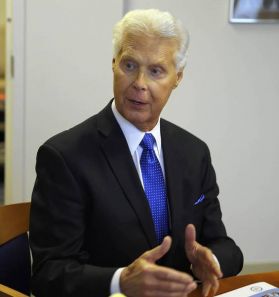 Chicago, IL – Jerry Roper, former president and CEO of the Chicago Convention and Tourism Bureau (CCTB) and the first professional trade show director for the National Restaurant Association, died Sunday at age 74 after fighting a long battle with prostate cancer.

“With decades of service to our community, the voice of Chicago is at rest,” said Rick Simon, president and CEO of United Service Companies, who served on the CCTB board of directors when Roper was the president and was 2003 CCTB chairman when Roper moved over to the Chicagoland Chamber of Commerce. “My friend of 40 years was Chicago’s champion of the trade show industry first, and then the leader of the business community.”

Roper served as the head of marketing and sales for CCTB for nine years before being elected as its president and CEO in 1988. During his legendary career, he served as director of the Rosemont Convention Bureau and the Rosemont Horizon, and also worked at the National Restaurant Association before joining CCTB. Roper became president and chief executive of the Chicagoland Chamber of Commerce in1993 and retired from that post in 2013.

“I did not work with Jerry directly at the National Restaurant Association as he was here in the early ‘70s as the first NRA professional trade show director, but I certainly interacted with him while he was at CCTB and the Chamber,” said Mary Pat Heftman, executive vice president, convention at NRA. “He was a great leader and mentor. Jerry was always a friend of the National Restaurant Association and a champion of the Chicago convention industry.”

Others who knew him agree. “Jerry broke new ground at NRA,” said Tom Corcoran, owner, Corcoran Expositions Inc., who worked at NRA after Roper left. “He had a great energy, and he was an inspiration guy, like a coach. He could always find a way to get people fired up, and difficult situations never bothered him. He will be missed, and there will never been another Jerry.”

Roper served as president and chief executive of the Chicagoland Chamber of Commerce from 1993 to 2013. While at the chamber, Roper and Corcoran worked together to launch a small business expo in the early 2000s. “I started that show for him, and we produced it together for a number of years,” said Corcoran.

Roper spearheaded the chamber’s advocacy efforts, which brought about the elimination of the city’s head tax, a rollback of the county sales tax, and workers’ compensation reform, according to a release from the chamber. He also played an integral role in the development of Chicago’s Perishable Center at O’Hare Airport in 2013 and has been a long-time advocate for a land-based casino in Chicago to boost tourism and economic development.

“Jerry would shift from sales mode with a show manager or business owner to being very direct with anyone, including our mayor, to get what he needed to secure the business…both at the Convention Bureau and the Chamber of Commerce,” said Simon. “Anyone who knew him lost a friend and the city lost a great leader.”

Roper is survived by his wife, Carol; a son, Jerry Jr.; a daughter, Tani Sison; and two grandchildren. Funeral services will be private and a celebration of Roper’s life will be held at a later date.

Trade Show Executive will provide additional information and details as they become available.