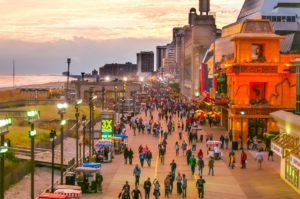 Chicago — Atlantic City’s new look will be on display next spring when the Trade Show Executive (TSE) Fastest 50 Awards & Summit heads to the East Coast from June 3-6 for three days of celebration of the fastest-growing exhibitions of 2018.

The organizers and managers of this year’s fastest-growing trade shows will be all over the famed Boardwalk as TSE, Meet AC and Caesars Entertainment unveil the latest class of honorees. “What better place to kick off the summer?” TSE Publisher and Editor Gabrielle Weiss said. “We are thrilled to join our industry partners and sponsors in welcoming the incoming Fastest 50 class to Atlantic City, one of the exhibition industry’s most attractive and historical host cities.”

Atlantic City has been on a hot streak. Last year it welcomed 255 meetings, conventions and trade shows, along with about 884,000 attendees. The Atlantic City Convention Center is one of the region’s premiere venues, and in recent months the city welcomed a new pair of hotel brands. Throw in the bustling Marina District and the new Harrah’s Waterfront Conference Center and you have a Fastest 50 that offers a great getaway with memorable networking, education and, of course, the annual Grand Awards presentation that recognizes 2018’s leading shows and show managers.

“We are honored to be hosting Trade Show Executive’s Fastest 50 Awards & Summit in Atlantic City and showcasing our revitalized destination to the top event organizers throughout the industry,” said Jim Wood, President and CEO of Meet AC.

A highlight of Atlantic City’s exciting new vibe is the newly developed Marina District and its waterfront Harrah’s Resort Atlantic City. The resort’s campus is the largest between Boston and Baltimore and is highlighted by the Harrah’s Atlantic City hotel tower, which features nearly 2,600 rooms and panoramic water views. There are plenty of amenities to explore, including a 25,000 square-foot pool, shopping, and dining options for business discussions and casual get-togethers. Unwind between the Fastest 50 activities at the Elizabeth Arden Red Door spa or try your luck and skill at the casino.

A highlight of the campus is Harrah’s Waterfront Conference Center. The venue features a pair of 50,000-sf ballrooms and access to more than 2,500 hotel rooms. “We are thrilled to be hosting Fastest 50 at the Harrah’s Waterfront Conference Center in 2019,” said Reina Herschdorfer, Director of Marketing, National Meetings & Events for Caesars. “When the conference center opened, we believed it was the beginning of a new era in Atlantic City, and four years later, we are proud that we have become an important venue for conventions and trade shows on the East Coast. We are excited that the Fastest 50 selected us and that you will experience our hospitality next year.”

And there is always the Atlantic Ocean, along with the memorable sights and sweet smells of fresh pretzels and hot dogs that have made the Boardwalk an iconic trade show destination for decades. And don’t forget to grab a sack of the famous saltwater taffy. “Atlantic City has been providing wonderful experiences for its visitors since trade shows and conventions were first launched,” said TSE Vice President of Events Diane Bjorklund. “We are looking forward to adding the Fastest 50 to Atlantic City’s highlight reel.”

Registration information and exact dates for the 2019 Fastest 50 Awards & Summit, along with details on how to nominate your show for the Fastest 50 roster, will be available soon at www.tsefastest50.com and via TSE’s E-Clips Breaking News.