Fall Trade Shows Are Roaring Back 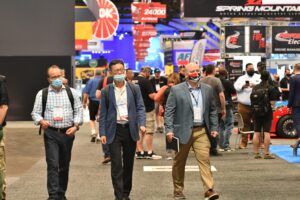 ORLANDO/LAS VEGAS — Convention center expo halls in two of the biggest U.S. trade show destinations are once again ringing with buyer-seller activity as the busy fall trade show season gets underway 2021-style. The return to face-to-face shows is  welcome for show organizers, exhibitors and buyers who found themselves sidelined after COVID shuttered all too many expos. While some exhibitors may have signed their contracts with a bit of trepidation, most found all doubts evaporating once the doors opened.

“From a business perspective, our booth had paid for itself within three or four hours of the doors opening,” said David Pedigo, CEO of Auralex Acoustics, of his company’s attendance at InfoComm 2021, which was organized by AVIXA and held Oct. 22–29. “Everything after that was just gravy.”

And those visitors were ready to do business. James Liu, President of Absen Inc., said, “Within 15 minutes of the show opening on the first day, all the questions went away. Our booth was so crowded and had so much traffic. And more importantly, we had a lot of quality customers who came here with reasons: Either they bring a project, or they want to talk about partnership with Absen.”

Auralex and Absen were just two of the 254 exhibitors who took to InfoComm’s 124,100-net-square-foot show floor at the Orange County Convention Center (OCCC) in Orlando this fall. As David Labuskes, CTS, CAE, RCDD, CEO of AVIXA, said, “InfoComm is the home for commerce, networking and learning in the AV industry. It was incredible to be back in person and play host for AV professionals to help them grow their businesses, careers and knowledge base.” For those who couldn’t make the show in person, InfoComm 2021 is extending the show through Nov. 30 with an on-demand virtual experience.

Other successful shows taking place this fall in Orlando included ASIS International’s Global Security Exchange (GSX) 2021, held Sept. 27–29 at the OCCC. The hybrid trade show and conference for the global security community attracted 7,200 in-person attendees and 300 exhibitors, while another 1,400 followed along digitally. 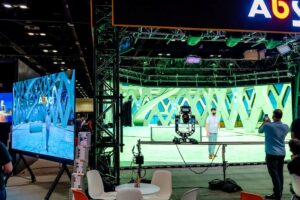 Trade Shows Gear Up in Vegas

The 2021 Specialty Equipment Market Association (SEMA) Show, held Nov. 2–5 at the Las Vegas Convention Center (LVCC), brought 1,300 exhibiting companies to this high-profile show, which serves the $47.8 billion automotive aftermarket. Like InfoComm, SEMA had to go virtual last year, but with this year’s total attendance of more than 100,000, it may have been Vegas’ largest convention since the pandemic began, having taken up residence in the LVCC’s West, North, Central and South halls. Part of the allure may have been high-profile attendees and car aficionados such as former “Tonight Show” host Jay Leno and country music star Keith Urban, but most came to see the thousands of aftermarket automotive parts and accessories on exhibit for both classic cars and performance vehicles.

“Our industry was eager and excited to connect at the 2021 SEMA Show after being apart for nearly two years,” Tom Gattuso, Vice President, Events, the SEMA Show, said. “The in-person interactions, meetings, product demonstrations, ride-and-drives and seminars were valuable in helping participants discover new products and trends and build strong, lasting relationships.

“Even after the specialty equipment industry showed resilience and experienced an increase in retail sales during the pandemic, this year’s SEMA Show underlined how trade shows and in-person gatherings are critical to conducting business. We’re glad that we were able to play a part in helping in-person events get back on track and hope that our contributions will help propel more events to take place in 2022.”

Also taking Vegas by storm was the National Hardware Show (NHS), which celebrated its 75th anniversary at the LVCC Oct. 21–23. The show, which also pivoted to digital in 2020 and added a year-round digital hub in 2021, pulled in 690 exhibitors this fall, including 259 who were new to the show.

“We are grateful for all exhibitors, attendees, staff and media who made this show possible and successful,” Beth Casson, Event Leader, National Hardware Show, said. While it was a bit smaller than it was pre-pandemic, there was plenty of action on hand to ensure everyone got a good bang for their buck. For example, NHS co-located with the North American Hardware and Paint Association (NHPA) All-Industry Conference, which included educational sessions, networking and award programs. Recorded content will be available soon on the show’s NHS Connects platform. 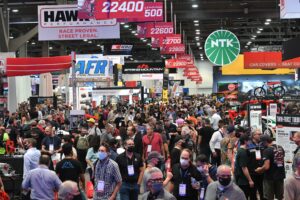 “Despite a smaller footprint, we made important investments this year to ensure NHS remains the top destination for industry members to make meaningful connections and celebrate successes for years to come,” said Casson. NHS also worked with the LVCC and its event contractor, Freeman, to ensure its 2021 show was the greenest yet by swapping out its paper directory for a digital version; using reusable, sustainably sourced signage; and eliminating aisle carpet to reduce CO2 emissions.

Trade shows also were hopping outside of the U.S. One that kicked off in mid-November was the Dubai Air Show, which featured more than 20 country pavilions displaying more than 160 commercial, military and private jets. The show offered 50-plus hours of education, guided tours and startup membership clinics as well as exhibitions of the latest in aerospace technology. The show, which was organized by Tarsus F&E LLC Middle East, was held Nov. 14–18 at the purpose-built DWC Dubai Airshow Site.

In Düsseldorf, Germany, MEDICA and COMPAMED also recently held a successful four-day show for 46,000 medical technology industry members and related suppliers from 150 countries. “The atmosphere in the exhibition halls was consistently relaxed and characterized by optimism,” Erhard Wienkamp, Managing Director Operative Trade Fair Business at Messe Düsseldorf, said. “Conversations with our customers have shown that in many cases we have exceeded expectations. People were finally able to establish new and intensify existing contacts in person.”

The show floor was packed with 3,033 MEDICA and 490 COMPAMED exhibitors, including 254 from the U.S. “These numbers are encouraging and were hardly expected to be at this level in the spring,” Christian Grosser, Director Health & Medical Technologies at Messe Düsseldorf, said. “With the combination of trade fair events and digital additions (the show offered a digital livestream of presentations, as well as specialist forums, a match-making too, and exhibitor online showrooms), MEDICA and COMPAMED have given the industry a strong impulse. The exhibitors are happy that they came to Düsseldorf and are already actively inquiring about options to take part next year.”