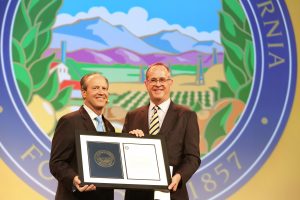 Anaheim, Calif. – The exhibition industry ended 2016 on a high note with thousands of industry professionals gathering for the International Association of Exhibitions & Events (IAEE) Annual Meeting & Expo! Expo!, which was held Dec. 6-8 at the Anaheim Convention Center.

“We had more than 2,300 attendees (unaudited) in 2016, compared with 2,324 audited attendance in Baltimore in 2015,” said David DuBois, IAEE President & CEO. Audited attendance figures won’t be available until early 2017.

The event featured a wide array of education, networking and exhibits over the course of three days. With more than 70 learning opportunities on and off the show floor during the event, the schedule was packed with sessions for all levels of show management. While it would be impossible to attend every on-site event, TSE presents key meeting highlights here.

For the first time, IAEE attendees were provided beacons with their badges. IAEE worked with Hubvents, a first-time exhibitor, to provide “intelligent show floor experiences.”

Hubvents partnered with EventBase, IAEE’s mobile app provider, to help attendees automatically discover the right contacts in their proximity and in real-time. “We had five activation zones that allowed users to connect with each other through the mobile app,” said Scott Craighead, CEM, IAEE Vice President of Exhibitions & Events.

Attendees who downloaded the event app and logged in could discover contacts during specific show floor activities, including Campfire Sessions, Guru Gatherings, Meet Up Pavilion, Tech Swim Up, and Tech Center Showcase. As attendees navigated the show floor and interacted at these designated networking sessions, Hubvents wearable beacons chronicled the journey and offered access to a personal timeline after the show.

“Attendees who turned in their beacon at the end of the show are able to access their show journey,” said Craighead. “The other key enhancement for attendees was to learn about the emerging tech by displaying the real time data points on several monitors placed around the show.”

Julia Smith, 2016 IAEE Chairperson and Senior Vice President for Global Experience Specialists, addressed attendees during the Opening General Session and discussed the association’s many accomplishments during her tenure.

“In June, IAEE hosted the 3rd Annual Exhibitions Day in Washington, DC,” she said. “We met with federal legislators on key issues, like the housing piracy scams that plague this industry and the potential implication of the mandatory overtime regulations.” In 2017, Global Exhibitions will be held June 7.

In October, IAEE, the International Association of Venue Managers (IAVM) and the Exhibition Service Contractors Association (ESCA) officially launched the Exhibitions & Meetings Safety and Security Initiative (EMSSI). “This is a significant step toward ensuring that U.S. venues and events establish standards and best practices for safety and security,” Smith said. “This initiative is supported by the Department of Homeland Security.

More than 2,400 IAEE members from 21 countries earned or maintained their Certified in Exhibition Management (CEM) designation, with 294 new graduates in 2016. “This represents the largest graduating class in one year,” Smith said.

It’s All About Networking

With 10+ planned networking opportunities over three days, IAEE offered no shortage of events for mixing and mingling with your colleagues and customers – most of which were included with a full registration.

The opening party was held on the Grand Plaza, a 36,000-square-foot outdoor function area adjacent to the convention center, Anaheim Marriott and Anaheim Hilton. A huge stage anchored one end of the plaza, with food trucks lining each side. The other end featured a whiskey bar and cigar lounge. 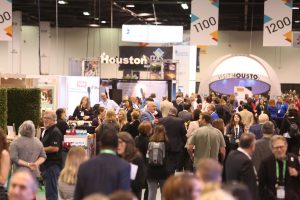 The Expo! Expo! Opening Party & Dinner featured Andy Grammer, a singer, songwriter, and record producer with pop hits like “Fine by Me” and “Keep Your Head Up.” He sang “Honey, I’m Good,” which peaked at No. 9 on the Billboard Hot 100. Visit Anaheim offered clients and press a meet-and-greet with the pop star, as well as autographed photos to take home.

Wednesday afternoon and early evening featured a plethora of exhibitor-hosted parties. The evening closed out with Humanity Rocks, a party with a purpose to benefit the Orange County Family Justice Center, which provides support to people whose lives have been touched by child abuse, domestic violence, elder/dependent adult abuse, or sexual assault. Entertainment featured the band Party Crashers. The following day, a check for $20,000 was presented to the organization.

After the last session let out on Thursday, IAEE hosted a happy hour from 4:30 to 6 p.m. at its Annual Closing Party at the Hilton Anaheim.

Expo! Expo! featured 262 exhibitors covering 40,000 nsf of paid exhibit space. Over the course of two days, the exhibit hall was open for seven and one-half hours. “We extended the show by one hour on Day 2,” said Craighead.

TSE editors hit the show floor looking for new technology products to share with readers, and exhibitors did not disappoint. “There were 45 new exhibitors in 2016, and 13 exhibitors in the IAEE Tech Startup Pavilion,” Craighead said. Look for a new product roundup in TSE’s January 2017 issue.

New Leadership for the New Year

On the last day of the event, Smith officially passed the gavel to Ryan Strowger, 2017 IAEE Chairperson and Senior Vice President of Exhibitions, Conferences & Sales for the International Association of Amusement Parks & Attractions (IAAPA).

During the Awards Luncheon (see sidebar for award winners), Strowger talked about the value of networking and education at the chapter level. He discussed his own experience, and the mentors he gained in Lawson Hockman and Jackie Wolfe. “We like to think of the chapters as the grassroots vehicle of the association,” he said. “I encourage you to get involved and stay involved. Make chapter participation one of your goals in 2017.” He announced the IAEE board approved the formation of the Mid-South Chapter, which includes southern Indiana, Kentucky, Ohio and Tennessee.

Strowger also announced the Certified Exhibition Program (see sidebar). “This program has been vetted by a task force for several years,” he said. “The pilot phase includes a targeted group of organizers, and the program will fully launch to a wider audience in March.” After working with a futurist on developing a new strategic plan, IAEE will implement the plan in 2017, so stay tuned for more details.

Anaheim is part of three-city rotation for IAEE with Synchronicities, a program that unites three destinations – Baltimore, Anaheim and San Antonio – and markets itself as a “coast-to-coast, year-to-year partnership that ensures the best deal possible, consistent service, and customized attendee engagement.” The 2015 Expo! Expo! was held in Baltimore, and San Antonio will host the 2017 event, which will be held Nov 28-30.