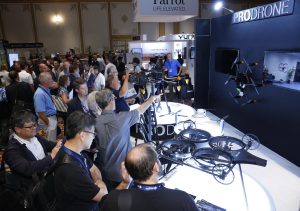 San Juan Capistrano, Calif. – Emerald Expositions added a new and versatile show to its technology portfolio in March when it acquired the International Drone Conference & Exposition or InterDrone from BZ Media LLC.

When Emerald paid an undisclosed sum for InterDrone they added a red-hot property that landed on the Trade Show Executive Fastest 50 in just its second year. The September show, held at the Paris Hotel in Las Vegas, occupied 222 booths, up 48.0% from its launch edition in 2015. The show also experienced an increase in exhibitors with 155 companies, and saw attendance fly 26% higher to 3,518.

“We have seen first-hand the emerging interest in drones at our two professional photography shows,” said Emerald President and CEO David Loechner. “We are excited at the prospect of leveraging our scale and expertise to deliver even greater benefits to InterDrone and to the entire UAV (unmanned aerial vehicle) industry.”

Drones have opened a new door into the aerial photography arena for private companies and enthusiasts who use them for scenic shots, cinematography, site surveying and monitoring and other industrial uses. InterDrone includes an educational track specifically for photography applications.

In addition, Emerald owns a trio of on-base equipment shows for the U.S. Marine Corps, an agency that has made creative uses for drones of all sizes around the world.

The rapid growth of InterDrone in just two years convinced BZ Media that it would benefit from having a major show organizer at the controls. “We decided that to take the event to the next level required a company of scale and expertise like Emerald.” BZ Media President Ted Bahr said. “We look forward to supporting Emerald through the 2017 and 2018 shows, and working together to accelerate the show’s growth under their ownership.”

The next InterDrone convenes September 6-8 at the Rio Hotel & Casino. Las Vegas will also be the venue in October for another up-and-coming drone show, Commercial UAV Expo Americas, organized by Diversified Communications.

Like InterDrone, Commercial UAV Expo took flight two years ago and generated some sharp growth in its metrics. Last year’s show at the MGM Grand drew 170 exhibitors, a 31.0% increase from the 2015 debut show. Attendance grew 15.0% to 1,720.

Corporate Solutions of Westport, Connecticut was the exclusive advisor to BZ Media, LLC in arranging, structuring and negotiating this transaction.