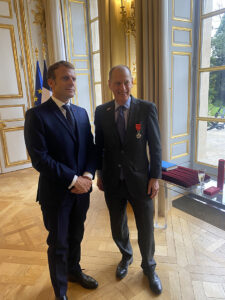 ARLINGTON, VA — Consumer Technology Association (CTA) President and CEO Gary Shapiro has received the Légion d’Honneur (Legion of Honor) award in recognition of his service spearheading the transition to a technology-forward society and organizing the world’s foremost technology event, CES.

In a ceremony at the Palais d l’Élysée in Paris, France, Shapiro was conferred the rank of Chevalier, becoming just the second American to receive this honor in 2021.

In remarks during the ceremony, President of France Emmanuel Macron stated that Shapiro is a “tech pioneer who became a tech giant,” and lauded Shapiro’s vision, “deep understanding of what tech requires” for business, and commitment to “people, values and principles.”

Shapiro said, “Eight years ago, on one of my annual trips to Paris, I met with President Macron, then the tech-savvy French Minister of Economy, and invited him to join us at CES. Since then, the tech partnership between our countries has blossomed. While only a few dozen French startups joined us in Las Vegas at CES in 2013, that number has now grown to over 300.”

As a matter of fact, French startups outnumbered American startups in 2019.

That same innovation will be on display at CES 2022. Through a partnership with La French Tech, French startups will return to Eureka Park for the ninth year and unveil innovative new technologies across multiple categories.

Thirteen CES 2022 Innovation Award honorees from France were also announced earlier this week at CES Unveiled in Paris. Spanning technology from health-focused wearables and green-tech to eco-design and smart energy, these innovations embody President Macron’s ideal of “technology as a service of the many…[and] technology for the common good.”

In reaction to receiving the Légion d’Honneur, Shapiro said, “One point President Macron made to me today is key — as technology shapes the way people access information and consume goods and services, we must focus on values and principles. He noted we both share a vision of technology as a service for the many, not the few. And we both believe in technology as a driver of the common good. That shared vision is going to bring huge dividends, not just for the people of France and the United States, but for billions around the world.”

Related. CES Coming Back Live to Vegas in 2022

Owned and produced by CTA, CES 2022 will convene the tech industry in-person and digitally, Wednesday, Jan. 5 to Saturday, Jan. 8. Global audiences will have access to major brands and startups, as well as the world’s most influential leaders and industry advocates. For over 50 years, CES has been the global stage for innovation, and CES 2022 will provide an opportunity for companies from around the world, both large and small, to launch products, build brands and form partnerships. Registration is now open.