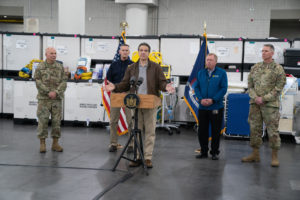 NEW YORK — While convention centers across the U.S. are under orders not to host large gatherings in the wake of the COVID-19 outbreak, many venues and their employees continue to serve their communities.

Some are donating food from canceled and postponed events to local charities while others are being evaluated to serve as field hospitals, emergency operations centers, quarantine shelters, housing for National Guard or FEMA, food distribution sites and more.

In New York, the Jacob K. Javits Convention Center is being converted to a field hospital with 1,000 hospital beds for non-COVID-19 cases. The site, which is expected to be operational next week, will be known as New York Medical Station at Javits. NY Gov. Andrew Cuomo said the overflow hospital, which would treat patients with non-coronavirus illnesses, could be staffed by more than 3,000 federal workers.

“I want to thank Alan Steel, who runs this convention center,” said Cuomo at a press briefing on March 23 after he toured and evaluated the Javits Center with officers from the U.S. Homeland Security, the U.S. Navy and the Army Corps of Engineers. “He has put on many shows before, and his team is very adaptable, but this is the first time they have ever built a hospital inside the Javits Center.”

In Chicago McCormick Place is set to be converted into the state’s first field hospital for 3,000 coronavirus patients by April 24,. In the coming weeks, the pandemic could lead to “40,000 people who require acute care in a hospital setting. That number will break our hospital system,” said Lightfoot at a news conference on March 26.

Related. See video from the press conference at: https://www.facebook.com/ChicagoMayorsOffice/videos/142344207204864/

“We were looking at what it would take — not in a theoretical but in an actual way — to lay out potentially thousands of beds in the conference center that is the symbol of our city’s great tourism and potential,” Dr. Allison Arwady, Head of the Chicago Department of Public Health, said in the press conference. Arwady, along with other state and city officials, met with the Army Corps of Engineers to talk about the plans for McCormick Place on Thursday morning.

“McCormick Place is a treasure to the city and host to many world-class events, but we must evaluate all large spaces we could use for potential field hospitals, relocation of emergency operations centers, housing for quarantined, armories, etc.,” Samir Mayekar, Deputy Mayor for Economic and Neighborhood Development, City of Chicago, told TSE.

Here’s a sampling of U.S. venues that have recently donated food from canceled and postponed events:

Las Vegas
As Las Vegas resorts and restaurants have temporarily closed their doors and shows and concerts have been canceled or postponed, the largest recipient of food and monetary donations has been the Three Square Food Bank, which provides resources for food-insecure Las Vegas residents. The food was dispersed at the nonprofit’s 43 emergency food distribution sites located throughout the Las Vegas valley.

Los Angeles Convention Center
In mid March, the Los Angeles Convention Center (LACC) and Levy Restaurants partnered with Musically Fed to donate and distribute 4,000 pounds of food surplus from event cancelations to the Alliance College-Ready Public Schools. The donations will go to students in grades 6-12 and their families. “We are thrilled to share the success of this initiative,” said LACC General Manager Ellen Schwartz. “As a facility committed to sustainability and community service, Musically Fed was a perfect partner to further our goals to reduce our environmental footprint while serving those in need.”

Georgia World Congress Center
From March 15 through March 24, Georgia World Congress Center, in collaboration with Goodr, donated approximately 12,100 pounds of produce and perishables to Atlanta Public Schools, which are serving as mobile grocery sites for students and families, and to Atlanta Mission, a local non-profit serving the homeless population. This translates to more than 10,000 meals.

TCF Center
At TCF Center in Detroit, Exhibit Hall A has been utilized as a food distribution site. “Tractor-trailers deliver pallets of dry goods to TCF Center. The product is broken down into combined units and delivered to satellite locations for needy families to pick up healthy meals,” said TCF General Manager Claude Molinari. “The operation is running 10 hours per day, five days per week with the assistance of the TCF Center administrative and labor personnel.”