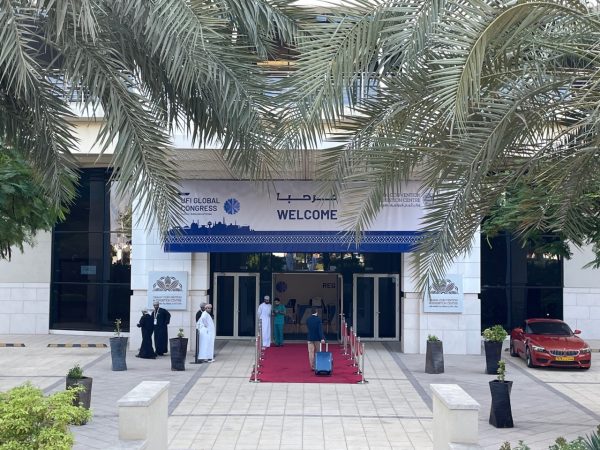 MUSCAT, Oman — The 89th UFI Global Congress, held at the Oman Convention and Exhibition Centre (OCEC) in Muscat from Nov. 14-17, drew around 400 attendees from some 50 countries and regions for an array of presentations, focus sessions and networking opportunities as the industry continues to strategize in a post-pandemic world.

Keynote speaker Sharmeen Obaid-Chinoy, a two-time Academy Award-winning filmmaker, and director of the Marvel Studio’s series “Ms. Marvel,” set the tone with her inspiring fight to tell through film the stories of marginalized people without a voice. Her own tenacity to succeed culminated in an ovation when she stated, “If a door has not opened for you, it’s because you haven’t kicked it hard enough.”

Trade Show Executive (TSE) was on hand throughout the conference, as well as for the UFI Global Assembly held the afternoon before the sessions began. Chaired by UFI’s 2022 President, Monica Lee-Müller, Managing Director of the Hong Kong Convention and Exhibition Centre, the General Assembly reviewed and previewed the association’s initiatives to support UFI’s members, including its emphasis on diversity.

“As a global association, we need full participation by talented, committed women, and men, from different cultures and backgrounds, to drive our industry forward,” Lee-Müller said. “Personally, I think there is work to be done. But I can see changes coming: If you look at the demographics of participants in this year’s Exhibition Management School, more than half of the participants were women.”

Lee-Müller also noted that among the six winners of this year’s UFI Next Generation Leadership Grant, four are women, and the six come from a diverse geographical mix: Asia, Africa, Central America, Europe and the U.S. Those winners ignited hope for the industry’s future during their panel, “A New Talent Narrative – Next Generation Leaders.” The session focused on their determination to grow and thrive in the industry. UFI also recognized women in the industry with the session “Women in Leadership.”

Another focus at the Global Congress was UFI’s role as a founding member of the Net Zero Carbon Events initiative, with a presentation by Alexander Alles, Executive Director of the Joint Meetings Industry Council, about the recent launch of the initiative’s Roadmap at COP27 earlier this month.

Pratibha Thaker, who heads up the Economic Intelligence Unit’s analysis and forecasts for the Middle Eastern and African markets, shared insights into the global market forecast, noting expected growth in most Middle Eastern countries despite economic headwinds in the coming year and a prediction for tourism numbers to continue to surge in 2023 by 30% over this year.

Another spotlight session was the Global Exhibition Industry Board meeting featuring representatives from all sectors of the industry. Participants included Anne Lafere, CEO of Belgian trade show company Easyfairs, which launched 20 new events in the past year. Emerald CFO David Doft spoke about how the acquisition market is heating up, while Kevin Donohue, HR Director, RX Global, UK & Corporate, offered tips on talent retention.

The session “The Future of Serendipity Is Insight” held a lens to the way data and insight from events could create serendipity through intelligent planning.

The final day of education and presentations featured an array of focus sessions, where attendees divided into tables for further discussion and exchanges of ideas on key challenges facing the industry. A session on digital innovation tackled seven subjects—data innovation, subscription models, data for sales, marketing automation, facilitating meeting programs, blockchain and Web3, and the metaverse.

Another session of sharing and learning focused on the “Customer Phenomena,” reflecting on the difference in the marketing of exhibitions now as compared to before the pandemic. Consensus throughout the room was the pandemic is over – a declaration expected from the World Health Organization in March 2023.

“As an industry we have a enormous amount to do with so many issues that affect us today.” Duck told TSE. “I hope that UFI will be seen as a guiding light and also a place for people in our industry to feel safe and comfortable to discuss and exchange opinions.”

Networking opportunities included the Welcome Reception at one of the host hotels, the Kempinski Hotel Muscat; a Congress Dinner at the spectacular Shangri-La Barr Al Jissah Resort & Spa, sponsored by the Sultanate of Oman Ministry of Heritage and Tourism; a night out at the Sultan Qaboos Stadium for a pre-World Cup soccer match between Oman and Germany; as well as a half-day post tour of the highlights of Muscat, with stops at the Sultan Qaboos Grand Mosque and Mutrah Souq among others.