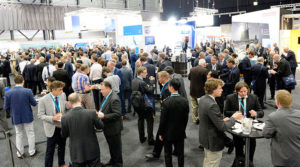 London-based Clarion will roll the venerable PennWell and its 40 events, held mainly in North America, into its Clarion UX division. Clarion is also well represented in the energy sector in Asia and Africa with brands including Global Utility Week and Africa Energy Forum.

“Clarion sees tremendous synergies between its portfolio and PennWell’s event and media properties, especially in North America,” Clarion UX President Greg Topalian told Trade Show Executive (TSE). “As we integrate the two companies, PennWell’s assets will enable us to grow our talented staff in North America as well as enhance Clarion’s portfolio overall, leveraging the strengths of both companies to the benefit of our clients.  In the meantime, it’s business as usual.”

The specific terms of the deal were not announced. Clarion CEO Simon Kimble was visiting PennWell’s headquarters in Tulsa, Okla., when the sale was announced. He told TSE that Clarion would not announce any near-term changes or plans until after he met for discussions with PennWell’s staff.

“PennWell’s roster of events strongly enhances Clarion’s portfolio,” Kimble said in a news release. “Our global network and depth of resources will strengthen PennWell’s offerings and enhance opportunities for growth and expansion across North America and globally.”

PennWell, which was represented in the sale by JEGI, has about 550 employees based at its Tulsa headquarters and around the world. Along with its trade shows, PennWell owns 130 media properties, including publications such as FireRescue and Oil & Gas Journal.

Founded in 1947, PennWell remained family owned until it was decided the company needed additional resources to maintain growth for its shows. “Clarion has market-leading brands that are complementary to PennWell’s, and they also have an enviable presence across Europe, Asia, Africa and the Middle East,” said President and CEO Mark Wilmoth in the release. “Merging with Clarion will enhance our offerings to the worldwide customers of PennWell’s portfolio of events, including the POWER-GEN series, DistribuTECH for electricity distribution, and FDIC for the fire market.”

A key unknown in the deal will be how Clarion handles POWER-GEN International. The metrics for the Gold 100 show have been going the wrong way for two consecutive years while PennWell has been aggressively tweaking the format.

The PennWell deal was the latest in Clarion’s expansion campaign in the U.S.

Clarion, which is a unit of the high-profile equity fund Blackstone, acquired Urban Expositions in 2015 and LeftField Media a year later. The companies were rebranded Clarion UX and placed under the guidance of LeftField co-founder Topalian.