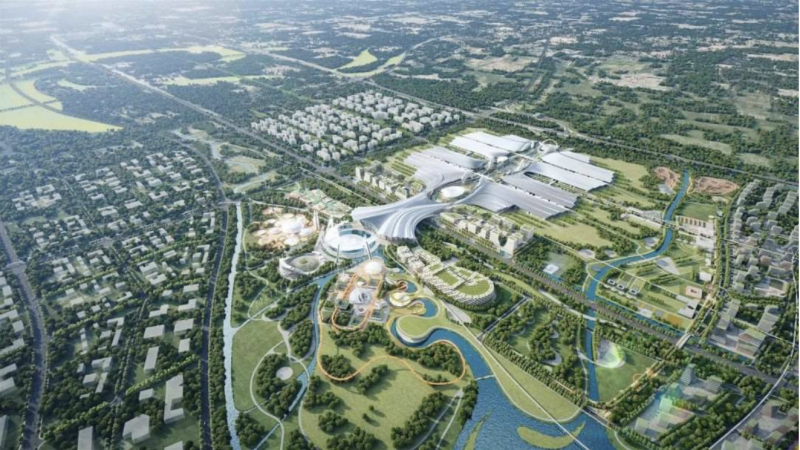 SHENZHEN – jwc GmbH, the leading management consulting firm for the global exhibitions and conference business sectors, won the Beijing Daxing International Airport Economic Zone (BDIAEZ) innovation competition that explores cities of the future as it aspires to become a world-class “aerotropolis” — an urban area centered around an airport — over the next few decades.

Jwc GmbH collaborated with China Merchants Shekou Industrial Zone Holdings Co (CMSK) and Overseas Chinese Town Enterprises Co. (OCT) on the project. These organizations have already worked together in developing and positioning Shenzhen World, which has become one of the most important venues globally, creating strong additional demand for exhibition and conference space and setting new standards in venue quality.

“This was a great achievement of our team and Shenzhen World. Plus, all of our collaboration was done remotely,” Jochen Witt, CEO of jwc, said. He went on to explain that this new area will include an exhibition venue and more. It will be an entirely new city with retail, hotels, entertainment venues, and more. “It demonstrates the country’s investment in the future of the exhibition and convention industry,” Witt said. “It also demonstrates the great confidence in the industry, particularly in China, coming back.”

He stresses the importance of China to the trade show and exhibition industry. “The industry wouldn’t have grown to the extent it has without China,” Witt said.

Aerotropolis Will Include Infrastructure for Successful Trade Shows

The BDIAEZ is situated in the eastern part of Daxing Airport Economic Zone, south of Tian’anmen, and will offer the most modern logistic and transportation systems with direct links to the Daxing Airport and easy access for exhibitors and visitors.

“Together with CMSK, OCT, and other supporting team members, we have delivered a creative and feasible proposal for Daxing. We believe the Daxing venue will be a new engine for the growth of China’s convention and exhibition industry and China’s economy as a whole. It will also become a masterpiece for the global C&E community. We look forward to contributing our know-how and experience to develop and operate the Daxing venue. We continue to view China as one of the most important trade fair and conference markets globally and will further expand our activities in the areas of strategy and venue consulting,” Witt said.

Covid-related shutdowns have stymied China’s return as a trade show and convention powerhouse. A zero-Covid policy has led to shutdowns just hours before trade shows kick off.  This is in stark contrast to two years ago, when China was the first economic powerhouse to reopen after the first wave of the pandemic. Not only is this impacting shows held in China but also the number of buyers and sellers attending trade shows and conventions in other parts of the world.

Examples of trade shows that have been impacted include trade fair Design Shanghai, which rescheduled its event to October as the country continues to feel the impact of the pandemic. More recently, TCT Asia was shut down nine hours before it was set to open at Shenzhen World Exhibition and Convention Center. The show was 99 percent set up and was to include 220 exhibitors. According to Duncan Wood, CEO at Rapid News, the show’s organizer, there were 24 cases recorded that led to the shutdown.

Access an updated look at what is open and what is not in China here.

The trade show industry remains optimistic that the country will soon get back to pre-pandemic levels. According to the most recent Global Exhibition Barometer by UFI, the Global Association of the Exhibition Industry, China will reach normal activity levels in October.