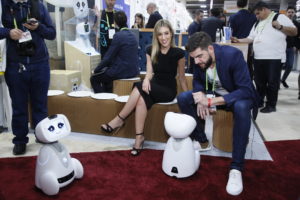 LAS VEGAS – The ongoing government shutdown has forced managers of CES to adjust their speaker roster prior to the huge electronics show opening on Jan. 8.

The Consumer Technology Association (CTA) said the shutdown had forced an unspecified number of speakers from federal agencies to scrub their plans to travel to Las Vegas for one of the largest trade shows of 2019.

According to media reports, staff for Ajit Pai, Chairman of the Federal Communications Commission, already announced that Pai had to cancel his appearance., which was slated to include an interview with Shapiro. Pai and the four FCC commissioners are still reporting to work, but their travel is restricted because of restricted government funding caused by the shutdown.

Secretary of Transportation Elaine L. Chao remained on the schedule, however, as a keynote speaker on Jan. 9.

“We urge attendees who planned to hear federal government speakers to check the sessions on the website to see if those individuals are still speaking,” Shapiro said.

The shutdown standoff wasn’t the only political matter spicing up CES this year. The trade dispute between the United States and China has begun to cause collateral damage to the global electronics industry. While there were no reports of significant impact on CES’ exhibit space or attendance, the increases in tariffs in 2018 was still rocking the electronics sector.

The CTA said in December that the tariff hikes were costing the U.S. consumer electronics industry an additional $1 billion per month due to tariffs on imported Chinese products. For example, the import tariffs paid for 5G wireless technology, a major market for CES exhibitors, jumped from $65,000 paid in October 2017 to $122 million shelled out in October 2018.

But the show will go on and is shaping up to be another blockbuster. The CTA projected around 2.75 million net square feet (nsf) of exhibit space and 4,500 exhibitors. Attendance has been running around 175,000 and will likely be in that same range this year.

As always, CES remains quick to pick up on new technology topics and product areas for the exhibit hall and conference agendas. This year’s show includes the return of the CES Sports Zone, which launched last year with all major sports associations represented; the Smart Cities at CES feature which launched last year, will include the launch of a conference session on network resilience in 2019; and the second-annual CES Eureka Park Climate Change Innovators contest highlights the latest ideas for chipping away at global warming on the consumer level.