Washington, DC – Karen Chupka, senior vice president of the International CES and corporate business strategy at the Consumer Electronics, is the 2015 recipient of the IAEE Woman of Achievement Award presented by the International Association of Exhibitions and Events (IAEE). 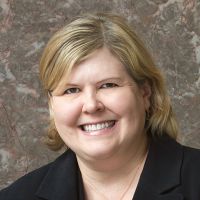 Chupka joined the association in 1989 and has helped develop the CES into one of the nation’s largest and most influential trade shows. For the past seven years, CES has ranked as the largest annual trade show on Trade Show Executive’s Gold 100. Chupka was featured as a TSE Leader & Legend on the cover TSE’s May 2013 issue.

“Twenty-six years ago, I started as a registration coordinator at CEA,” said Chupka. “Through the opportunities at CEA and the networking and education I received through IAEE, my career and our show have grown in ways that I never could have imagined.”

“Karen’s vision and strategy have helped the International CES set the tone for the global technology industry year after year,” Gary Shapiro, CEA president and CEO, said. “Karen inspires us all to reach higher, do better and collaborate with those who think differently. She is a true woman of achievement, a shining example of a trade show industry leader.”

The Woman of Achievement Award annually recognizes a woman in the trade show field who has made significant contributions to the industry. Chupka, a frequent speaker and familiar face at industry events, received the award April 8 at the IAEE Woman’s Leadership Forum in Washington, DC. Nominations for next year’s award are open until June 12.

Chupka told Trade Show Executive that IAEE had been a big help to her as she developed her career, primarily as a source of information and inspiration from her colleagues. “The best thing that IAEE does is provide networking opportunities at the chapter level as well as its discussion boards,” she said.

Collaboration is also a key within the walls of the CEA, a global association with more than 2,000 member companies and a long list of advocacy issues ranging from legislation and regulation to market research and traditional industry promotion. Ideas for new features at CES are reviewed on a regular basis by show management. “If we think the idea will add value, then we present it as a part of the show budget,” said Chupka. “All of the CES department heads meet monthly to evaluate opportunities that come up throughout the year. This gives us the ability to push good ideas forward quickly.”

Much of the growth of CES can be credited to the association’s strategy of seeking out new developments within the electronics industry that could rapidly become the “next big thing. “We want to make sure that new companies know they are welcome at CES, and we want to make it an easy investment for them,” Chupka said.

And with creativity and rapid change within the market comes unique and evolving business models. Chupka and CES are proactive in opening the door before a competitor does. New exhibit areas and networking space at CES such as Eureka Park for startups, and C Space for creative types who may not have a need to exhibit, address opportunities that may not have even existed a few years earlier.

The bottom line for CES is providing value for exhibitors and attendees. “Since our beginning, we have always wanted CES to be an affordable investment for even the smallest company,” Chupka said.

It’s an award-winning idea that Karen Chupka and the CES team carry out to perfection.