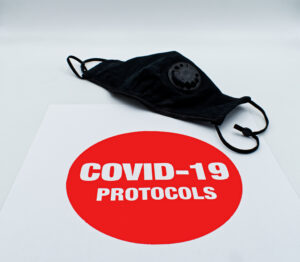 WASHINGTON, D.C. — The news that the Centers for Disease Control and Prevention (CDC) has updated its COVID-19 guidance to recommend that even fully vaccinated individuals wear face coverings while in public indoor venues in high-transmission areas was greeted with cautious approval by the U.S. Travel Association. “From the onset, we have said our industry will follow the guidance of public health authorities. The last thing we want is a backslide in the nascent recovery of travel, particularly as business travel slowly begins to rebuild,” USTA CEO Roger Dow said. “Adhering to the CDC guidance allows Americans to safely continue the return to our professional lives, including in-person meetings and business travel.”

However, he added, “The updated CDC guidance should not hamper the progress made by our country in recent months as we have begun to travel and gather in person again.” He pointed out that large-scale, in-person professional events (PMEs) can and have been run safely during the pandemic. He cited a set of evidence-based recommendations developed in June by leading healthcare scientists at The Ohio State University that would ensure a safe return to large-scale, in-person PMEs.

“The authors note how PMEs differ from other large gatherings in that they offer a stronger mitigation capability through layers of trusted safety measures, including vaccination and wearing masks, in a controlled environment. In fact, according to scientific modeling by the Exhibitions and Conferences Alliance and Epistemix, in-person PMEs pose a near-zero (0.001%) risk of COVID-19 transmission to attendees—even for large events,” he said. The fastest and most critical path to normalcy remains vaccination, he added, saying, “We strongly encourage all Americans to protect themselves and their loved ones by getting vaccinated.”

Guidances Also on the Comeback at the Local Level
Even before the CDC issued its latest recommendations, masking guidances on a local level already had been making a comeback as the more contagious Delta variant of COVID-19 became the dominant strain of the virus in the U.S. and new infection rates more than doubled week over week recently. Some areas in Nevada, California and Massachusetts recently began advising people to don their face coverings whenever they’re indoors — though in the case of Nevada’s Clark County, which includes Las Vegas, masks were only mandated for employees, not visitors or meeting attendees.

However, Nevada on July 28 issued an emergency directive that requires everyone in the state to wear face coverings indoors, whether they are vaccinated or not, due to the rising number of cases in its unvaccinated population. While trade show organizers are not required to submit their own health and safety plans  under the new directive, venues that can host 250 or more people are required to submit a COVID-19 survey to the County.

Related. Does Your Vaccine Policy Make the Right Point?

“We want to assure you, your exhibitors and your attendees, that the Las Vegas destination remains vigilant,” Las Vegas Convention and Visitors Authority Chief Operating Officer Brian Yost said. “The state of Nevada and the Southern Nevada Health Department’s experts are closely monitoring the data and responding swiftly to implement the most appropriate safety measures while following the guidance of the CDC. The LVCC and our casino-resorts and attraction partners continue to adhere to the most stringent sanitation measures to provide a safe and healthy environment for everyone, with the LVCC continuing to follow the guidelines set forth under its GBAC Star Accreditation.”

As of July 28, the State of California added recommendations for universal masking indoors statewide, regardless of an individual’s vaccination status. Previously, a mask mandate was in place just for those who are not vaccinated. The California Department of Public Health said it made the change after reviewing the new CDC guidance, and in response to the increasing spread of the Delta variant and the higher-than-desirable percentage of its population that have not yet been vaccinated. “This adds an extra precautionary measure for all to reduce the transmission of COVID-19, especially in communities currently seeing the highest transmission rates. Local health jurisdictions may be more restrictive than this guidance,” the CDPH said in its guidance update.

Along with Nevada and California, Connecticut, Illinois, New Mexico, New York, Oregon, Rhode Island, Virginia, Washington and West Virginia have some version of a mask advisory or mandate in place, along with Washington, D.C., though many only require the unvaccinated to wear face coverings while in public indoor venues as of July 29. US News and World Report is keeping a running list of state-by-state masking rules here; the CDC also provides an interactive, county-based map of the country that can be accessed to see regularly updated COVID infection rates throughout the U.S.

In Massachusetts, some popular tourist destinations on Cape Cod have recently reinstituted mask mandates for all indoor activities due to local spikes in COVID cases. However, Massachusetts Governor Charlie Baker is still taking the new CDC guidance under advisement and is not recommending any state-wide changes yet, though he did say his administration may have more to say on the subject soon, according to The Boston Globe.

While other states may, like Massachusetts, not yet be imposing any state-wide changes in masking rules or guidances, some cities and regions have followed the example of Clark County in Nevada, Provincetown in Massachusetts, and Los Angeles in California to pre-empt state-wide mandates with local rules of their own. Among them are New Orleans, which has implemented a mask mandate for county employees regardless of their vaccination status, and Savannah, Ga., which now requires all residents to wear masks while indoors. Local health authorities also have been bucking against statewide bans on mask mandates. For example, in Florida, where the governor has banned mask mandates, Palm Beach recently instituted an indoor mask mandate for all residents, vaccinated or not, according to ABC News.

Border Reopening Setbacks
As the U.S. reinstitutes masking guidances on a national and in some cases state or city/local level, the U.K. recently decided to fully reopen its economy with no occupancy limits or masking requirements, even though it also is seeing a continuing rise in cases and its health and safety experts have advised against a full reopening.

Related. Canada to Reopen Borders to U.S. Travelers on August 9

Though Canada recently announced it would reopen its borders to fully vaccinated U.S. travelers on August 9, the U.S. has decided not to reciprocate, at least not yet. The U.S. government recently announced it would be extending border restrictions for non-essential travel for U.S. citizens to Mexico and Canada until August 21, citing the recent rise in COVID-19 cases in the U.S.

These neighboring countries join the U.K. and Europe’s 26 Schengen area which, though they now allow U.S. citizens who are fully vaccinated or can provide a negative COVID-19 test to enter their countries without having to quarantine, are, like Canada and Mexico, still under a U.S. border entry ban. “We maintain the existing travel restrictions at this stage,” White House spokeswoman Jen Psaki said in a recent press briefing, adding that the reason for the decision is due to the rapid spread of the Delta variant “here and abroad.” The CDC also recently added the U.K., Spain and Portugal to its list of destinations for U.S. citizens to avoid due to rising COVID-19 infection rates.

All that may change. Earlier in July, U.S. President Biden said that the country is considering a timeline for lifting travel restrictions after hearing German Chancellor Angela Merkel’s thoughts on the issue. U.S. Travel, along with other organizations including airlines, the American Hotel & Lodging Association and the Global Business Travel Association have been lobbying since this spring for a “risk-based, data-driven roadmap for reopening the U.S. to international travelers.”

As patience wears thin in both countries whose citizens seek to enter the U.S. and those in the U.S. who are eager to welcome international travelers, a White House official told Reuters last week “We want to ensure that we move deliberately and are in a position to sustainably reopen international travel when it is safe to do so.”