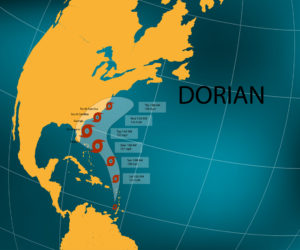 ORLANDO, Fla. – Hurricane Dorian forced Emerald Expositions to cancel two of its September trade shows, although exhibitors won’t have to wait long to catch the next wave.

Surf Expo and the co-located Imprinted Sportswear Show (ISS) had been scheduled to run Sept. 5-7 at the Orange County Convention Center (OCCC) in Orlando, but a high degree of uncertainty and public angst about Dorian’s potential threat to much of Florida forced show managers to scrub both events as a precaution.

“Given the state of affairs regarding Dorian, we had no choice but to cancel,” Roy Turner, Surf Expo Senior Vice President and Show Director, said in a written announcement. “We recognize that many of our customers will be directly impacted by Hurricane Dorian and we feel their focus should be on their families, businesses and community at this time.”

The sentiment was the same as ISS announced that its Orlando show would also go dark. “Canceling the show allows those in the storm’s path to focus on preparing their families, businesses and communities, and it prevents those traveling from outside the area from coming to an unsafe situation,” the statement said.

The OCCC was closed to the public early in the week as Dorian menaced much of Florida’s Atlantic Coast and was instead turned into a staging area for firefighters and other rescue crews that streamed into town to assist with the storm’s aftermath. Orlando International Airport was closed for more than a day.

Both shows promised their attendees and exhibitors registration and housing refunds and assistance in having freight returned or rerouted from Orlando. Exhibitors were given the option of staying in Orlando, if necessary, at the same rate as the show’s room block. Emerald said on the Surf Expo website that it was working with its insurance carrier to determine the rate of reimbursement for exhibitors’ costs, such as drayage, decorating and travel.

Emerald also turned its attention to the next editions of the two shows, which will be coming up sooner rather than later. Surf Expo is a semi-annual show and will return to the OCCC in early January, while ISS is a traveling series of shows and opens next Oct. 3-5 in Fort Worth, Texas.

The September Surf Expo was projected at 190,000 net square feet (nsf) of exhibit space with approximately 850 exhibitors and a pre-show registered attendance of more than 6,500 buyers. “This is broadly similar in size to our upcoming January 2020 event,” Turner told Trade Show Executive.

Many September exhibitors will be on the floor at the January show, although Turner said the booths devoted to surfing products tended to be larger in January while the “towed watersports groups, which include wakeboarding and waterskiing,” were usually a smaller presence than in September.

The cancellation also postponed the relocation of Surf Expo to the refurbished West Concourse area of the OCCC, as well as the launch of Waterfest, a pre-show event to introduce retailers and industry media to a select collection of new brands and products in a festival-like setting.

The Labor Day holiday contributed to a light event calendar at the OCCC and other convention centers in the path of Dorian, so the number of expo cancellations appeared minimal.

Meanwhile, another notable cancellation was the Sept. 6-8 Wilmington Boat Show at the waterfront Wilmington Convention Center in North Carolina. The show organizers, JBM & Associates, said in a statement that they were working with city officials and the convention center to move the show off the September calendar to a different month beginning in 2020. September is considered the peak of the hurricane season along the Atlantic Coast.