Call for Entries: Nominate the Best Shows of the Year for the TSE Gold Grand Awards 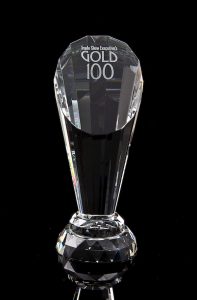 Oceanside, CA – The 2016 Trade Show Executive (TSE) Gold 100 Awards & Summit is just a few months away, and the festivities at the Park Hyatt Aviara Resort, Spa and Gold Club in Carlsbad, CA September 21-23 will not only honor the largest shows of the past year but also those that set the Gold Standard from a variety of other perspectives.

“The Gold Grand Awards shines the spotlight on the most inspirational thinkers and their pioneering ideas,” said Darlene Gudea, President of Trade Show Executive Media Group.

TSE’s Gold Grand Awards annually honor innovation and expertise in many facets of show management including marketing, global strategies, technology, and social responsibility. In addition, “The Greatest Trade Show of 2015” is the ultimate award, spotlighting a center-ring event that has excelled from every perspective.  New this year, “The Greatest Corporate Event of 2015” will also be honored, to recognize the many innovative ideas that spring forth from these organizers.

Gudea said the Gold Grand Award reflects far more than recognition for a job well done or an addition to one’s trophy case. “The award is a valuable benchmark that can prompt  further discussions about show strengths and new avenues of growth,” Gudea said.

Grand Awards are Open to ALL Shows
Nominations are being accepted from Gold 100 shows as well as shows of all sizes in North America or overseas. Visit www.tradeshowexecutive.com and nominate your show or  event that captures the glitter of the Gold 100. The deadline for entries is 5:00 pm PDT on July 29.

Nominations will be accepted from TSE readers, Gold 100 show organizers and staff, and/or their service providers. Any nomination from a service provider will be verified with the organizer. The entries will be judged by the TSE editorial staff.

Trophy or not, a week at the Park Hyatt Aviara Resort, Spa & Golf Club is definitely worth the trip to the Left Coast. The Aviara is a posh and secluded AAA Five Diamond getaway about 30 miles north of San Diego International Airport and a mile or so from the Pacific Ocean. The immaculate grounds are home to the 18-hole Arnold Palmer golf course that was the venue for the LPGA Kia Classic. There is also a range of activities available from tennis on down to networking in the sun at the 3,200 square foot pool.

“Carlsbad has grown from a hidden gem to one of the marquee travel destinations in Southern California,” said Diane Bjorklund, Vice President of Events. “The Gold 100 Awards & Summit will once again offer show organizers and their industry partners a setting where new ideas, serious networking and relaxation blend together into a single unforgettable experience.”

Details on registration and the Gold 100 agenda will be announced in the near future. In the meantime, enter September 21-23 in your mobile devices and start making plans to attend the 2016 TSE Gold 100 Awards & Summit.