Behind the Scenes: Making MAGIC Happen 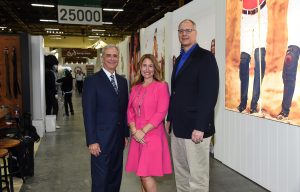 Las Vegas, NV — In the Spring of 2014, Tony Calanca, Executive Vice President of Exhibitions for UBM, grappled with a challenge.  MAGIC, UBM’s semiannual fashion trade show, which spans roughly one million net square feet of exhibit space each February and August, was growing too big for its host venues, the Las Vegas Convention Center and the Mandalay Bay Convention Center.  MAGIC ranks among the top ten largest trade shows in the US each year and is also one of the fastest-growing shows, according to Trade Show Executive’s Gold 100 and Fastest 50 rankings.

Therefore, it was music to Calanca’s ears when Mandalay Bay executives told the MAGIC team that the center was planning an expansion. The facility aimed to add 350,000 square feet of function space in a short time frame:  construction would start in October 2014 and be completed in October 2015. “We studied the expansion layout and went back to Mandalay and asked if there was any way to cut two-and-a-half months off the construction time in order to be ready for our August show,” Calanca told Trade Show Executive. “We were stunned when the Mandalay team got back to us the very next day and said they could do it.”

In a world where convention center expansion projects rarely are completed on time and on budget, Calanca had a healthy dose of skepticism. He felt that there was a good chance that the expansion would not be completed in time for MAGIC’s August show, given the time frame. “However, we had nothing to risk at that point, given that we were so far out from booth sales,” he said. But he still wondered how Mandalay Bay was going to add that much space in less than a year’s time.

Calanca was able to keep tabs on construction progress via webcam and said, “It was like combat engineering at Mandalay Bay, with George Patton’s army doing four layers of construction at the same time.” When April 2015 rolled around and Calanca was asked what Plan B would be if the expansion was not completed on time, Calanca quipped, “Plan B is to leave the country.” But as it turned out, there was no need for Plan B. The expansion was not only finished on time, but the Mandalay Bay team was able to customize the expansion to MAGIC’s needs.

“In the apparel world, the look and feel of the space is critical,” Calanca said. “So we also asked the Mandalay team whether they could paint the walls white and substitute a roll-up door for a hangar door if we paid for it. Without any hesitation, they said yes.”

Calanca said the experience was proof positive that what makes a venue successful above all else is service. “We’re proud that MAGIC was the first show in the new expansion,” he said. “Bricks and mortar alone are not what make a venue great. This is a service business. You can go to a great facility and have a lousy experience because of the service attitude. The Mandalay team realized that more important than the space they were selling was their attitude and their response to customer requests. That’s what really makes the difference,” Calanca said. He cited Martie Sparks, Mandalay’s Vice President of Convention Operations, and John Flaherty, Vice President of Property Operations (at that time), for exceptional service and responsiveness.

The Mandalay Bay Convention Center now boasts more than two million total square feet and over 900,000 square feet of contiguous exhibit space, ranking as the 9th largest convention center in the nation. “We’re a customer-focused convention facility,” said Sparks. “We’re all about partnering and being flexible with our customers to assure a successful event.”