ANAHEIM, Calif. — While a resurgence of COVID-19 has dampened hopes for a near-term full-on restart for conventions and trade shows in several states, including Arizona, Florida and Texas, and caused others, including California, to walk back some reopening measures, plans for a brighter future continue.

Anaheim, Calif., for example, is not letting the pandemic get in the way of its plans for developments it believes will make it even more of a draw for meetings and conventions. The city just announced two plans for the redevelopment of the Platinum Triangle, as the 820-acre area surrounding the Honda Center and Angel Stadium is known. 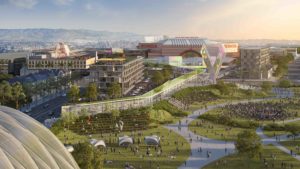 The 250-acres up for redevelopment includes two areas: one surrounding the MLB Angels Stadium, and another new mixed-used community and live entertainment district near the Honda Center, home to the Anaheim Ducks.

“If we could, we would be dancing in the streets,” said Jay Burress, Visit Anaheim’s President and CEO. “These have been in the works for a long time, and to have them both get the green light at the same time is more than we could have hoped for. It will be a transformational change for our city. We couldn’t be more excited.”

The $3 billion, 115-acre mixed-use and live entertainment ocVIBE district surrounding the Honda Center will include convention crowd-pleasers such as a 68,000-square-foot food hall, restaurants, retail shops, two hotels with a total of 650 rooms and meeting space, and a 6,000-capacity concert venue, as well as a plethora of public, park, and office space. The first phase is projected to open in 2024; and the plan is to have the project fully completed in time for the Summer Olympics in 2028, when the Honda Center is slated to host indoor volleyball.

The 153-acre Angel Stadium development also will feature two hotels with a total of 943 rooms, more than a million square feet of restaurants, shops, and entertainment, and a five-acre urban park and office and residential buildings.

These redevelopment plans “symbolize Anaheim’s plans for a bright future as it grows and develops,” said Burress.

The National Association of Music Merchants (NAMM), which kicked out the jams with its four-day show at the Anaheim Convention Center in 2020, is anticipating the new developments will strike a chord with future attendees. “NAMM has called Anaheim home for many years, so we are thrilled to see these developments come to life,” said Cindy Sample, Director, NAMM Trade Show Operations with the TSE Gold 100 and Fastest 50 show. “With our member’s and attendees’ passion for music, there is no doubt that these new entertainment districts will resonate with our audience. Increased nightlife options paired with new live music venues and four new hotels, are all added draws and welcome additions for future NAMM Shows.”

“As we work through our return and recovery plans and look ahead to strengthening our business in Anaheim, we are excited for this development news and the many opportunities ocV!BE will bring our show and community,” said Lacey Gautier, Group Show Director, Natural Products, a TSE Fast 50 and Gold 100 show. “This new destination will undoubtedly attract our audience and become a new hub for accommodations, events and entertainment.”

In the meantime, the convention center continues to plan for a near-term return of meetings and conventions.

“We have submitted our final GBAC STAR report and hope to have our certification in a week or two,” Burress said, referring to the third-party facility cleaning and disinfection accreditation program run by the Global BioRisk Advisory Council division of worldwide cleaning association ISSA.

He added that the Anaheim Convention Center has joined a coalition of the 12 main California convention centers that are undergoing the GBAC STAR certification process. “We are putting together protocols and guidelines for [California Governor Gavin Newsom] to review in light of reopening our convention centers.”

While the Anaheim Convention Center has events on the books for this fall, “2021 is so full of business that has rescheduled from 2020, well, it’s a good problem to have to try to find dates,” Burress said. “I hope by then [the pandemic and its restrictions on public gatherings] will all be a thing of the past.”

The new development, he added, “will continue to give us momentum moving forward.”