AmericasMart and IMC to Join Forces 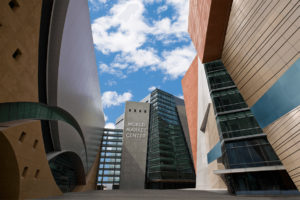 ATLANTA — AmericasMart and International Market Centers (IMC) will merge in a deal to combine the two leading U.S. operators of showroom space for the furniture, fashion and gift sectors.

IMC Chairman & CEO Robert Maricich will become CEO of both companies, which will combine under the IMC brand. AmericasMart Chairman and CEO Jeffrey Portman will become an adviser to the IMC Board of Directors when the deal closes in the Third Quarter. Financial terms were not announced.

“We look forward to bringing together our two companies to provide exhibitors with exceptional access to global markets and buyers with even more convenient opportunities to explore top products across sectors,” Maricich said.

AmericasMart and IMC have developed similar strategies in the trade show industry by using permanent venues rather than renting space in convention centers. Showrooms in their buildings are leased to exhibitors year-round and augmented by temporary exhibit space that’s used for a regular schedule of exhibitions. IMC operates the World Market Center Las Vegas, which has 350,000 square feet of prime exhibit space, according to the latest Trade Show Executive (TSE) World’s Top Convention Centers directory. IMC also has the High Point Market in High Point, N.C., which specializes in furniture showrooms and hosts two annual “market” exhibitions.

AmericasMart operates the Atlanta Convention Center at AmericasMart in downtown Atlanta. The building includes 502,000 sf of prime space and is the venue for 17 market shows, including the semi-annual Atlanta International Gift & Home Furnishings Market, which is a fixture on the TSE Gold 100 roster. AmericasMart also organizes the Gold 100’s LIGHTFAIR International, which rotates between different cities. The total AmericasMart campus covers 7.1 million sf.

“AmericasMart has long served as a crossroads of commerce,” Portman said. “This joining of the talents and resources present in both organizations will sustain and advance that role for the ultimate benefit of the customers we jointly serve.”

So far, no changes to the existing show schedules have been announced.

The deal was announced May 15, about a year after IMC was acquired by an equity partnership led by Blackstone. The announcement noted that since 2012 Blackstone has invested about $5 billion in the Atlanta real estate market.

IMC also has used its new corporate backing to announce plans to expand both the Las Vegas and High Point properties. “This announcement to combine with AmericasMart coupled with our continued investment in High Point and Las Vegas demonstrates our enthusiasm about the expansion of our core business and our optimism for the future of markets for the furniture, home decor gift and apparel industries,” Maricich said.